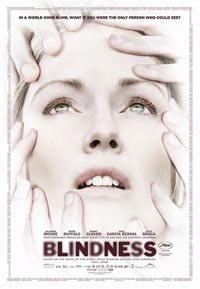 Based on the commercials, I was curious to see the movie Blindness — a moody adaptation of a sci-fi/thriller novel about a future where (almost) everybody goes suddenly blind. Then I started reading the reviews. Now don’t get me wrong — I’m not one to reject a movie outright because of what the critics say. But when I see critics getting particularly creative about the way in which they put down a movie, it tends to make me think twice.

Case in point, here’s what they had to say over at Slice of SciFi …

What was a poetic, exhaustively-brilliant piece of fiction has now become a clunky, clattering, ever-collapsing film of bludgeoning rhetoric.

Okay, so that’s kind of damning, right? But who knows — maybe this film just wasn’t Sam Sloan’s cup of tea. Or maybe he was too attached to the book. The people over at AMC’s SciFi Scanner tend to have a good nose for bad sci-fi movies …

The ad campaign for Blindness consists of posters sporting the taglines “Love is blind,” “Faith is blind,” and “Hope is blind.” Would that moviegoers were themselves given blindfolds before this two-hour dud. The better to avoid watching Julianne Moore step in human feces, and an unshaven Gael García Bernal and an “evil” Jew steal money and rape women, and an endless parade of blind people running into door frames and walls and falling down stairs like they’re on a particularly cruel episode of The Three Stooges. Earplugs might help, too — so as to block out Danny Glover’s Legend of Bagger Vance line readings. 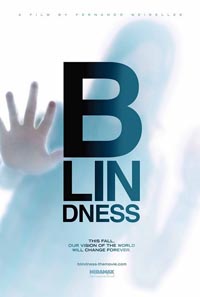 Hm. No beating around the bush there. Things are looking bleak so far. But maybe it’s just a sci-fi geek thing? Maybe if I head over to a more high-brow website, like Salon.com, they’ll see the movie for the art house masterpiece it was meant to be? …

There’s nothing daring, revelatory or dramatically compelling about “Blindness”; it’s all conceit, with no core. It feels like an exercise conceived and executed by a junior-high drama class — you can almost see the whole thing being scratched out on a blackboard, beginning with the words “The location: Any City in the World. The time: The Near Future.” There’s no way this can turn out well….

Meirelles hammers his points so hard, the noise is deafening: The whole going-blind thing is bad enough; you just wish the movie would shut the hell up.

Wow. “Shut the hell up.” Really? Nothing subtle about that. Okay, so maybe going high-brow wasn’t such a good idea. Let’s go old school instead. Rex Reed, what did you think? …

What does it all mean? Nothing about Blindness ever makes any real sense; you go away feeling lousy, and it is hateful to look at. I have never seen floors filled with the contents of waste from overflowing toilets (to put it politely) photographed with so much misguided artsy-craftsiness. Worst of all, the torture slugs along for more than two hours…. This is one movie where sightlessness might be a blessing.

Dude, you did NOT just go there! Ending your review on a pun? That is SERIOUSLY old school. You better hope nobody tells Gene Shalit you just stepped all over his shtick. 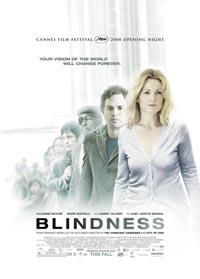 Okay, enough of this. Why am I screwing around with Rex Reed when we all know who the true King of All Critics is. The man who had the balls to write the books “Your Movie Sucks” and “I Hated, Hated, Hated This Movie”. Pulitzer Prize-winning thumb critic, Roger Ebert. He’ll tell it like it is, for better or worse …

“Blindness” is one of the most unpleasant, not to say unendurable, films I’ve ever seen. It is an allegory about a group of people who survive under great stress, but frankly I would rather have seen them perish than sit through the final three-quarters of the film. Denatured, sometimes overexposed, sometimes too shadowy to see, it is an experiment to determine how much you can fool with a print before ending up with mud, intercut with brightly lit milk….

Oh, what an ordeal. Clothes falling off. Nude in the cold. People fighting, dying and raping. Blundering around and tripping over things. Hitting their heads. Being struck by pipes they don’t see coming, swung by people who don’t know what they’re swinging at….

And the noise. Lordy! This is a soundtrack so aggressive I was cringing in my seat. No merciful slumber during this film. Metal clangs, glass shatters, bullets are fired, people scream, and the volume of these sounds seems cranked up, compared with the surrounding dialogue, like they do with TV commercials….

It is my good fortune to be attending a screening tonight of the newly restored print of “The Godfather.” I’m looking forward to the peace and quiet.

Right then. So … that would be a thumbs down, I’m guessing?

Based on all this, I definitely won’t be seeing Blindness in the theater. And odds are, I won’t get around to seeing it on DVD in a few months either — too many other DVDs to watch before that. At best, I might catch it on cable someday. Unless, of course, somebody out there reading this has seen the movie, and wants to go out on a limb to recommend it. Anybody?