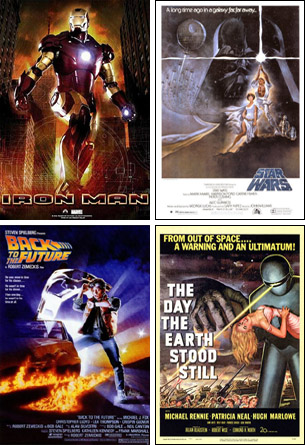 Now nobody loved Iron Man more than me. But does it really deserve the top spot here? Best comic book movie maybe, but does it truly have enough elements of great sci-fi movies — vision, social commentary, dystopia, metaphor, mythology, epic storyline, etc. — to qualify for #1? Or was that, more likely, just people voting while the adrenaline was still pulsing through their bodies? The great meal you had last week is always going to seem better than the ones you had 20 years ago.

I recognize that this isn’t a “Top 100” list, so you have to draw a line somewhere. But frankly, I’m a little suspicious. Did the same users who put Iron Man at the top of the list REALLY put The Day the Earth Stood Still in the top 10, disregarding every other movie from the 50s and 60s? Or is that some editorial meddling on the part of Yahoo, to give the list a small bit of legitimacy? I’m reminded of the people who have old battered editions of The Catcher in the Rye, The Great Gatsby, and The Complete Works of Shakespeare on their bookshelf, just so everybody will know that they DID go to college, even though they mostly read comic books and watch TV.

Wait … I just described myself. Please disregard that last point.

Anyway, tell me which movies YOU think should or shouldn’t be on this list.