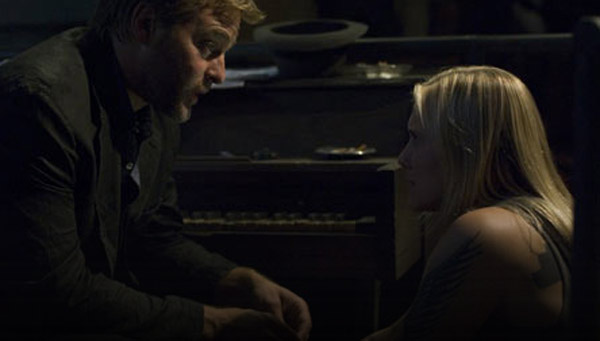 This was another low energy episode, but with a few more twists and turns than last week.

Tyrol learns that the Cylons want Boomer to be released from Galactica’s brig … so that they can execute her for colluding with Cavil to kill thousands of Rebel Cylons.  Distressed by this, he goes to visit her, and using that dream-state thing that Cylons do, Boomer shares with him her vision of the perfect life together that they had always talked about back when they were a couple, including the perfect house and a daughter.  Tyrol tries to talk Roslin out of handing Boomer over, but when he can’t, he comes up with a plan to help her escape.  He causes a power failure — of which there are many these days on Galactica, while repairs are being performed — and in the confusion, knocks out one of the other Eights, and swaps her with Boomer.

Once free, Boomer finds Athena in the locker room, and knocks her out, presumably to swap places with her, so that it won’t seem unusual when she flies away in the Raptor that Tyrol is getting ready for her.  Annnd … that’s when it gets weird.  Because Helo shows up in the locker room, thinks she’s Athena, and long story short, they end up doing the Dance of the Glowing Red Spine … with a beat up Athena bound and gagged in a closet … forced to watch and listen.  Then Boomer proceeds to day care and picks up Hera … and it’s only at this point that I finally realize what’s going on.  That Boomer bringing Ellen back to Galactica was only a setup for a bigger plan concocted by Cavil — to steal Hera.

Poor Tyrol remains clueless about how badly he’s been played, and even though Athena escapes her bonds before Boomer has a chance to leave the ship, it’s still not soon enough.  In a battle of wills, Adama orders the flight pod doors closed, hoping to prevent the Raptor from taking off.  But Boomer makes a break for it, clips her wing on the way out, then makes an FTL jump within close proximity of the ship.  Which is apparently a VERY BAD THING to do.  The space/time concussion strikes a heavy blow to the side of Galactica, which I’m thinking will NOT help the ongoing repair process.  It’s only after Boomer has jumped away that Tyrol realizes she’s taken Hera, and when he does, he is suitably horrified.

The other ongoing storyline this week involved Starbuck and the Piano Man. Bored by the monotony of sending wave after wave of ships to search for habitable planets, CAG Starbuck has been going to the bar every night to drink and complain that the piano man keeps playing the same song over and over.  It turns out he’s working on a composition, which she tries to help him with … because her father was a piano player too.  Long story short, the piano player isn’t really there, Starbuck has been talking to her father in her head, and with the help of a drawing given to her by Hera, she starts playing a tune that her father taught her as a child.  A tune that almost sounds like “All Along the Watchtower”, which brings The Final Five (those who aren’t busy getting used by Boomer) running to her side.  Because it’s a tune that Daniel — Starbuck’s father — used to play.

Thanks to the hyper-guess-itivity of the Web in these past few months, this last revelation probably wasn’t as much of a surprise to most people as the writers would have liked it to be.  The whole Boomer still working for Cavil thing was probably more shocking.  But it was still nice to have that particular plot point wrapped up, so that we can finally figure out what the true nature of Starbuck is, once and for all.

6 thoughts on “BSG – Someone to Watch Over Me”