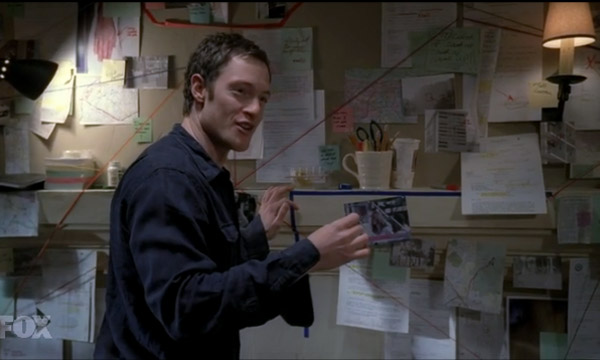 This episode had definitely had more twists and turns than any of the others that preceded it.  What’s more, along with “Man on the Street,” I felt this one really gave us a sense of how these characters and this premise could be sustained over the long run.  Interestingly, this is the second episode in a row where there’s been no “client” to speak of, and for my money, they’ve been two of the best to date.  Just as we keep hearing that “fantasy is the Dollhouse’s business but not its purpose,” stories like this one seem to indicate that the client episodes are this show’s premise, but clearly not its purpose.  We are continually reminded that there is a bigger story to be told not only outside the Dollhouse, but within its own walls as well.

Kicking things off with the classic “# Hours Earlier” trope, the episode shifts into a multiple-POV technique that gives the writers a chance to tell a series of narratives that all feed into one.  We start the story from Echo’s point of view, then November’s, then Sierra’s, then Victor’s, then back to Echo, ending with Dewitt, and each time the perspective changes, some detail from the previous narrative makes a bit more sense for us.  But what’s especially interesting is that unlike last week, where the focus was on the Actives themselves, this week the dolls act primarily as vehicles to teach us more about the rest of the cast.

November’s story gives us a glimpse of Ex-Agent Ballard, cooped up in his apartment, diagrams and photos and scribbled notes and lines of yarn plastered to his wall, frantically trying to piece together the Dollhouse puzzle now that he’s unemployed and has too much time on his hands.  To make matters worse, just as “Mellie” is starting to talk him down from his conspiracy ledge, she switches off, and becomes another covert message from the anti-Dollhouse coalition.  Ballard is crushed to find out not only that the woman he loves is an Active, but that in order to save his own life and take down the Dollhouse, he can never let Mellie know that he knows what/who she really is.  Poor Ballard.  You have to wonder if he’ll ever get a break!

Equally sad, Victor’s story reveals to us that the “Miss Lonelyhearts” client we’ve heard about a few times now is none other than Dewitt herself, who is away from the Dollhouse under the pretense of a meeting with her Rossum bosses.  Instead, she plays a different kind of dollhouse with Victor (as Roger), fencing with him, sexing with him, and sharing intimate and somewhat desperate fantasies of running away with him.  It’s a side of Dewitt we’ve never seen before, and one she feels she can only share with somebody who will never remember it.

Meanwhile, the big story is that Topher has discovered a bit of tech that’s been used to tamper with his imprints, tells Dominic, and the hunt is on to uncover the traitor in their midst.  Suspecting NSA involvement, Dominic has Topher imprint Sierra with the persona of an Alias-like operative who then breaks into NSA headquarters and finds proof of who the traitor is — Ivy, Topher’s assistant.  But all is not what it seems.

Concurrently, Echo has requested — yes, that’s right, requested — that Topher imprint her with the ability to help him solve the mystery, and he turns her into a spy-hunter persona who is part Super Interrogator, part Sherlock Holmes.  She interviews all of the key personnel, and in the end, deduces that the traitor is in fact Dominic himself, while we deduce that her antagonistic encounters with him in the past are probably what triggered her need to be involved in this scenario in the first place.  A kick-ass fight scenes ensue between Echo and Dominic, and thanks to the Kung Fu skills that Topher gave her, Echo wins in the end.

Dewitt is clearly crushed to learn that it’s Dominic — her right hand man for three years — who has betrayed her, and she spares him none of her wrath.  She watches in cold fury as Dominic is held down while Topher forcibly strips memories from his mind, and even continues to stand there watching after she takes a stray bullet to her side. When Topher tells her about Echo volunteering for spy hunter duty, she seems both intrigued and excited, rather than terrified, surmising rightly so that Echo has ironically just saved the Dollhouse.  So unworried is she by Echo’s actions that she promotes Boyd to the Security Chief job, and assigns Echo a new handler.

What’s most interesting, though, is that for all the sound and fury surrounding Dominic, we realize that the traitor is still safely in place in the Dollhouse.  After all, Dominic clearly wasn’t working for the same people who have spoken to Ballard through Echo and November.  So who’s the real traitor, and when will they be revealed?

1 thought on “Dollhouse: A Spy in the House of Love”