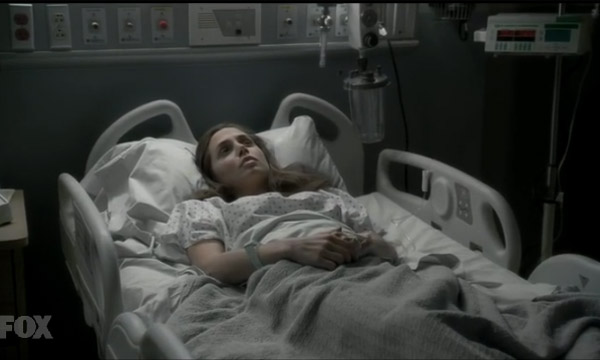 A bit more of both Echo’s and the Dollhouse’s history was peeled back for us in this week’s episode, in which all of the Actives except Echo are assigned to help contain the effects of a drug that has accidentally been released on a college campus.  This drug, designed to help uncover forgotten memories, has the effect in normal people of first causing intoxication, then a complete lack of impulse control, and has already lead to the death of one student.  Since the Actives effectively have no long-term memories, they are theoretically immune to the drug, which makes them perfect candidates for damage control.  And the dude from the “Rossum Corporation” who is responsible for the drug knows this because — drum roll please — the Rossum Corporation is scientifically affiliated with the Dollhouse organization.

Echo, who is on assignment with the motorcycle john from the first episode, finds out about the crisis on the news, and decides to cut her assignment short to rush to the campus.  Through flashbacks, we find out that Echo — then Caroline — was a bit of an animal rights activist, and that Rossum was the target of much of her activism.  In fact, her boyfriend at the time was killed during a break-in of one of their labs, where she discovered that Rossum was experimenting not only with animals, but also with human brains and fetuses.  The rest of the chronology here was a bit sketchy for me, but the basic gist seems to be that as a result of Caroline’s activities, she came to the attention of Adele Dewitt, which eventually led to the deal that Dewitt makes with Caroline at the start of the first episode, which resulted in her becoming Echo the Active.

When, in the present day, Echo rushes to the college campus, it’s the dead boyfriend she’s trying to save.  And when she arrives with her mixed up memories, Victor — programmed to be the NSA agent in charge of rounding up those exposed to the drug — identifies her as a drug victim, and quarantines her with the others.  Among those she’s quarantined with is a friend of the student who killed himself earlier in the episode, and the two of them escape quarantine to — as Caroline did in a past life — break into the Rossum lab and find out what’s going on.  Unfortunately for Echo, it turns out that what’s going on is that Sam (the student) deliberately overdosed his friend for backing out on their plan to steal the drug and sell it to another company.  Sam drugs Echo, and tries to escape, but Echo — stuck in her flashback — catches him, and Handler Boyd takes him away.

Meanwhile, Dewitt and Topher have been tasked with trying to create an antidote for the drug, and to do this, they deliberately inject Mellie — who we just learned was an Active last week.  What they find out is that the Actives are NOT completely immune to the drug, and that it causes flashbacks.  Victor and Sierra experience this as well.  What Dewitt and Topher  also learn is that the effects of the drug are transferable by touch, which they learn firsthand when they start tripping themselves.  Fortunately — for them and us — the effects of such casual exposure wear off after a few hours.  But unfortunately for Mellie, the experience proves a bit traumatic, and perhaps for this reason, she is recalled from her ongoing assignment of keeping an eye on Agent Ballard.  She packs some suitcases and leaves, without really giving him much of a reason why or saying when she’ll be back.

As for Sam the Student, things come full circle when we see him sitting at the same little table with Dewitt that we’ve seen pre-Echo Caroline sitting at a couple of times now.  And as with Caroline, Dewitt makes Sam an offer — give us five years of your life, and in return, we’ll take care of your mother, and when the five years is over, your life is yours, and your trespasses against Rossum will be wiped clean.

So the exact nature of the relationship between Rossum is fuzzy still — does one run the other, or are they both owned by the same parent company?  But based on the nature of the drug, it’s not much of a leap to say that the results of whatever experimentation the one does affects the other.  And in at least two instances we know of, a crime committed against Rossum was “punished” with recruitment into the Dollhouse.

While not as tightly written as last week’s episode, it was nice to see to all of the Actives … um, active in this episode, and to learn a more about both Echo and the Dollhouse.  Although I could have lived without the scenes where Dewitt, Topher, and Security Chief Dominic were acting high.  While I know people have clamored for more of the humor they’re used to seeing in a Whedon show, their silliness seemed out of sync with the cold and sometimes malevolent characters they usually seem to be.  It worked for Boyd, and would have worked for Ballard, because those guys are ultimately likeable … but it didn’t work with the others.