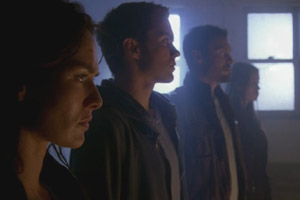 In this episode of The Sarah Connor Chronicles, we learn that the bully from A Christmas Story, Scut Farkus (played by Zack Ward), went on to channel his rage into becoming an anti-Skynet resistance fighter. He travels back in time to warn the Connors that Ralphie is actually a terminator, and that by no means should T-Ralphie be allowed to get its hands on a prototype Red Ryder Carbine Action BB Gun. Unfortunately, as Scut is dying from a gunshot wound to the chest at Sarah Connor’s feet, he realizes that the time travel bubble was about 60 years off. So to save face, with his last dying breath, he tells the Connors, “Stop Greenway, Serrano Point, Two Days”.

It turns out Serrano Point is a nuclear power plant of particular strategic importance to the Future Resistance. It will be going online in two days, and Carl Greenway is one of the supervisors. (If Greenway looks familiar, it’s because he was the creepy Agent Garrity on Journeyman, as well as the hobo from Don’s childhood on Mad Men.) Greenway is the cautious type, to such an extent that his caution may actually result in the plant being shut down, which makes him somewhat unpopular. Sarah befriends him in a flirty way, and surprise — he ends up dead. Seriously, she’s like the kiss of death at this point, isn’t she? First Kyle Reese, then Andy Goode, and now this guy. If Charley’s smart, he really will follow through on that plan to leave town and never look back. 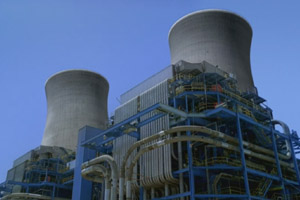 Okay, so long story short, Greenway is killed and replaced by a terminator, which attempts to cause a meltdown of the plant. Which means that this scheme has been in the works for a while, because T-Greenway is not a liquid terminator, but a standard model, with plastic surgery to make itself look like Greenway. Cameron, apparently still wonky from the explosion, fights T-Greenway for a bit, then with an assist from Sarah, finishes him off and returns the coolant levels to normal. Day saved. Yay! Except … it’s apparently exactly how Skynet wanted things to turn out. Because in the final scene, the CEO of a company called Automite Systems announces that in order to avoid human failure in the future, Serrano Point is about to implement a new automated system … and that CEO turns out to be none other than the morphed T-1001, Catherine Weaver.

So … was Scut Farkus actually a resistance fighter? Or was he a human agent of Skynet? Because Derek didn’t recognize him, and it was his intel that led to Skynet getting what it wanted all along — a compromised nuclear power plant, but not a destroyed nuclear power plant. And if Scut isn’t what he appears to be, then how much should of all the notes he wrote in blood on the Connor’s shed wall be trusted? 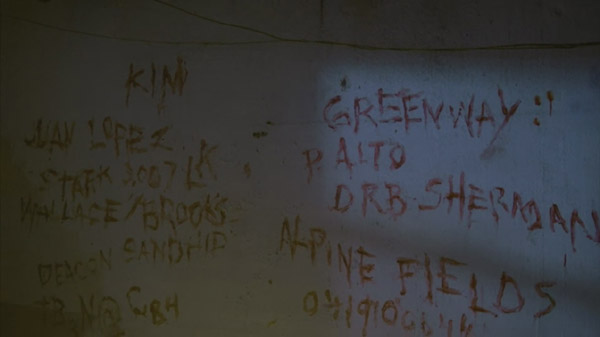 For those who can’t read the screen shot above, I’m seeing these words/names …

So I guess now the Connors have some homework to do. Whether the homework they do ends up serving their ends or Skynet’s ends remains to be seen. And while we’re on the topic of people’s whose motives we can’t be sure about, there’s the matter of John’s new blonde girlfriend, Riley. I’m guessing she’s not a cyborg, or Cameron would have detected that. But she does seem a bit mysterious, no? And just as Sarah should always be worried about the imminent mortality of any guy she dates, John should always be a bit worried about the true identity of any girl who approaches him in an assertive way. The last girl to do that was Cameron, and while that worked out fine (more or less), that may not always be the case.

And hey, it was great to see Busy Phillips (of Freaks & Geeks)!

2 thoughts on “Sarah Connor: Automatic for the People”