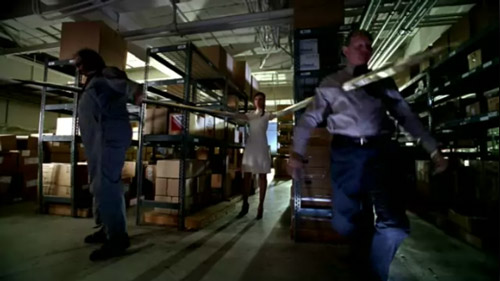 Sarah manages to drive herself to a hospital after being shot in the leg at the end of the last episode.  But when local cops start to sniff around, she leaves the hospital, and instead kidnaps a female doctor to remove the bullet for her.  Sarah is weak and in pain, but keeps herself going by hallucinating that John’s father Kyle Reese is beside her, urging her along.  And then when she starts getting too aggressive with the doctor, Kyle urges her to scale things back.  It’s the first time we realize just how much Sarah internalized what Kyle told/taught her during their short time together in the first movie, and how useful it is for her in times of crisis.

Meanwhile, the kidnapped doctor clearly has a story of her own, and is all to willing to help Sarah, even with a gun pointed at her head.  She projects her own experience of being spousally abused onto Sarah, and Sarah goes right along with it, fleshing her story out with details about her son John and John’s dead husband “Reese”, which makes the doctor all the more willing to help.  Once the bullet is out of Sarah’s leg, Derek shows up, then the doctor’s abusive cop boyfriend (played by Connor Trineer, who was Trip on Enterprise and Michael on Stargate Atlantis).  The doctor shoots and kills her boyfriend, and only seems to realize after the fact much of what Sarah told her was a lie.

In a bit of sad news, John’s girlfriend Riley does NOT die as a result of slitting her wrists at the tail end of the last episode.  He and Cameron take her to the hospital, the doctors fix her up, then Derek’s girlfriend’s Jessie comes and sneaks her away. Riley claims cutting her wrists was part of a ploy to get John’s sympathy, but we all know better.  And that’s enough said about that annoying little plot line.  Sadly, these are the only scenes we get with Cameron in them, and she doesn’t kick a single person’s or cyborg’s ass.

Unlike Catherine “T-1001” Weaver, who this episode carries out the most impressive slaughter fest we’ve seen since Cromartie went to town on those FBI agents at the end of Season 1. Morphing her hands into blades time and again, she cuts down every single person working in the Desert Heat and Air warehouse that Sarah located last episode, then blows the place up. She is covering ZeiraCorp’s tracks, having been made aware by the John Henry A.I. earlier in the episode that her future tech facility’s cover has been blown on the internet.  John Henry also lets her know that he knows she’s a cyborg, and she assures him/it that, “Everything I do, I do it for you.”  Which, sadly, put a Bryan Adams song in my head before I could stop it.

By the way, I appreciated the nice fake out they used in the warehouse slaughter scene — showing us a row of urinals, so that we’d think one of them would morph into the T-1001 again.

Anyway, this was a decent wrap-up to the loose ends of the mid-season finale.  But as a stand-alone episode, I considered it a bit weak.  Frankly, it needed much more Cameron and Derek, and much less Sarah and Riley.