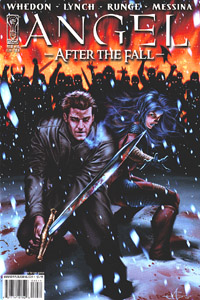 Things pick up some in the second half. Angel and his crew take on a den of vampires led by a flouncy vampire, who mentions some powerful group who was “beginning to make ripples before the fall of Los Angeles” and who is interested in Angel. That can’t be Gunn’s group … which makes it just another mystery. Anyway, in the middle of this fracas, Illyria outs Angel’s human-ness to the rest of the group, and Connor immediately starts treating him like he’s infirm, then bails the scene entirely with Gwen in tow. Nina and Illyria stick with Angel, though, and together they track down Gunn’s stronghold … and that’s where it ends. Presumably, next issue (which isn’t due out until late August) will be the big Gunn/Angel smackdown.

A nice treat for those of us who read the Spike: Asylum miniseries that originally landed Lynch and Urru this gig was the appearance of Beck and Anna and the Mosaic Wellness Center, from which Betta George is absent. Beck and George also both appeared in the Spike: Shadow Puppets miniseries (also created by Lynch/Urru). But what I still can’t quite figure out is if those books happened before or after the events in “After the Fall”. I’m inclined to say after, because we already pretty much know from the TV show what Spike was up to in the months before he and the others ended up in Hell. But who knows. And since Beck’s perception is that Los Angeles is actually NOT in Hell at the moment, who even knows what the truth is.

Anyway, I just bought the first Spike: After the Fall book (with Urru drawing it, woot!) this week, and I’ll be reviewing that one soon. My hopes are high.