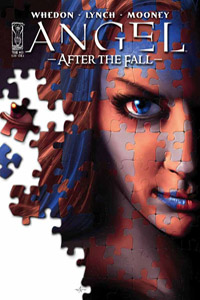 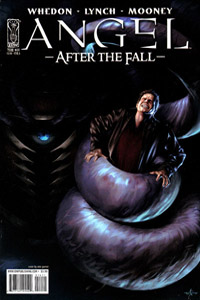 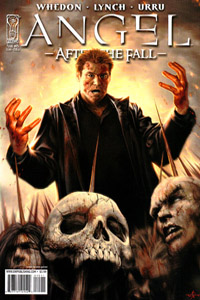 In this issue, Spike dies. Poof. Staked through the heart by a Slayer and turns to dust. Except, of course, he doesn’t really. We find out how in the next issue. Unfortunately … or fortunately … I don’t know … Gwen does die (probably), sacrificing herself to save Connor when Wolfram & Hart send a fleet of dragons to enforce whatever their big plan is. It’s hard to care about Gwen much, because even with her story in “First Night,” I just didn’t get where she was coming from. The truly sad death is The Dragon (Cordelia). I would have liked to see him stick around, especially if/when the crew gets out of Hell — seems like there would have been a lot of comedy potential there. But oh well.

Meanwhile, Connor kicks Gunn’s ass and pushes him out the window, then uses Kate’s words (which were Angel’s words) to convince Angel to live and fight, despite what he has learned about his apocalyptic future. As a result, after some encouraging words about Angel being a “champion,” Cordelia fades away. Then Spike shows up, not so much dead, along with the Slayers who somehow didn’t dust him, while outside, Gunn tricks Illyria into reverting to Fred, then shoots her through the chest.

In this issue, we learn that the reason Spike didn’t die in the previous issue is because of a room with a 5-minute time loop that Illyria created at some point (not sure when), and which Gunn was using as a way to kill the Slayers over and over again without actually killing them. So this applied to Spike as well. After Wesley breaks the news to Spike that he’s not the Shanshu, the gang tries to use this room to heal Angel, but since he’s been injured for longer than 5 minutes, it does no good.

Gunn reveals that his plan is to bring Illyria back to her full demonic power, with the hope that she’ll be able to use her time slip ability to roll things back to before Wolfram & Hart sent Los Angeles to Hell. At this point, it’s clear that there really is no Fred — only Illyria, who gets confused by Fred’s powerful memories sometimes. Gunn tries to heal her by using the demon dais thing that we saw back in the first couple of issues, but before he can finish, some W&H demons abduct Angel and use the dais to heal him instead, eager to protect their investment in the Angel Apocalypse.

As it turns out, Illyria didn’t need much healing. The issue ends with her reverting to her true form — a giant Godzilla-sized demon. Betta George reads her mind, and tells the others her plan: to clean house by wiping out time and existence entirely. And for some reason, Gunn is happy about this.

First of all, let me just say how glad I am that Franco Urru is drawing this book again. I know some people don’t think his likenesses are as true as Runge or Mooney, but I tend to think that’s far less important than clean lines, getting the action right, and being clear about exactly what’s happening at any given point. A comic book story is told with more than just words, and Urru does a great job of that.

Anyway … at this point, it’s the Angel crew versus Godzillyria — who takes down Groosalugg — and Gunn, who has possibly/probably killed Connor. Angel is tempted to kill Gunn in retaliation, but checks himself at the last moment, and realizes that this would just feed into what Wolfram & Hart wanted from him. So he resists, and focuses on defeating the larger (literally and figuratively) threat instead … Godzillyria.

Choosing to fight smart, Angel uses Betta George to channel Wesley’s and Spike’s memories and presumably emotions about Fred into Illyria’s mind (or whatever the equivalent is for an ancient demon). The result is mass confusion for Illyria, which leaves her vulnerable enough for the W&H army to take her down. The victory is a bittersweet one for Angel, however, as Connor is dying. His final words to his father (in this issue at least, possibly forever) are, “Vampire or not — you’re a good man.” This is a poignant statement from somebody who has rejected his father most of his life., and of all the losses Angel has experienced in the past, this one will likely hit him the hardest.

I have to say, for whatever reason, I wasn’t as choked up by that final scene as I was probably supposed to be, even when I re-read the two issues before it as a lead-in last night. After “After the Fall” wraps up (with Issue #17), I plan to go back and watch the last season or two of the TV show, then read all 17 issues in a row, and when I do that, I think I’ll be more emotionally invested. Because for whatever reason, Connor just hasn’t resonated for me in the comic in the same way that Angel, Spike, and Wesley have. (Or maybe my sympathy for Connor has been tainted by watching Vincent Kartheiser act like such an ass in Mad Men.)

So anyway, there you have it. Odds are, unless Issue #16 really blows my socks off, I probably won’t bother to recap this book again until #17 comes out. But in the meantime, I still need to recap the Spike: After the Fall miniseries one of these days …