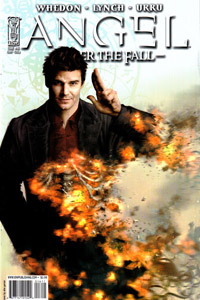 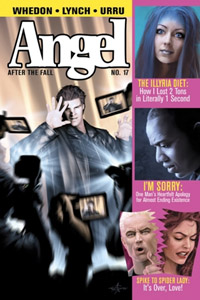 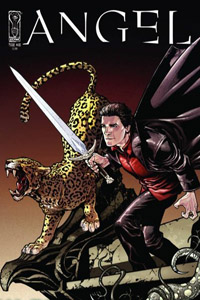 For all intents and purposes, this is the season finale episode issue.  While #17 is the last “After the Fall” issue, it’s really kind of an epilogue.  The actual climax and resolution happens in this issue.  It opens where the last issue ended, with Connor dying in Angel’s arms.  And I just have to point out that the first page, which visually parallels Connor’s birth and death, is quite poignant, and brings home Angel’s grief for me much more strongly than Connor’s dying words did.  As for that grief, Angel channels it the best way he knows now — by immediately killing some demons.

As he does this, Wesley has a revelation.  Namely, that the demons can’t kill Angel.  Or more to the point, they aren’t allowed to, because Wolfram & Hart need him alive so that he can bring about The Apocalypse at a later undetermined date.  If he ever gets close to death, W&H will “simply pull a better him out of the timeline”.  And with this, Wes realizes what has to happen — that Angel needs to die before W&H have time to pull a better him.  Angel agrees, and while Spike holds the demons off, Angel provokes Gunn into killing him.  The result is that W&H is forced to return to the last moment before they pulled L.A. into this bit of pocket time between moments.  Namely, to the Big Showdown in the series finale.

What’s different now, though, is that everybody — including Angel — remembers everything that happened in the “Hell Moment”.  As a result, Illyria is more passionate, in part because Wesley is dead for keeps now, and she tips the scales of the battle more than she ever could have or would have cared enough to the first time around.  And Angel knows to go looking for Gunn before he can be turned into a vampire.  But when he tries to take Gunn to the Wolfram & Hart HQ for magic healing, it turns out the building isn’t there any more.  So he takes him to the hospital instead, where he’s surprised to find that even the citizens of L.A. remember everything that happened … and remember him in particular.

Angel’s obvious happy ending, of course, is that Connor is no longer dead.  But his mixed happy/weird ending is that he’s now out of the closet, so to speak.  As Connor puts it, he’s gone from “urban legend — to just plain legend”.  And for somebody like Angel, that’s a whole new kind of Hell.

Fast forward a month.  Angel is dealing with his new found celebrity, while trying to figure out where the hell Wolfram & Hart went.  Apparently, their building not only isn’t there any more, but somehow was never there to begin with.  The prevailing theory is that their big Hell Moment gamble exhausted either their power or their funds or both.  But I’m sure it’s not the last we’ve seen of them.

Meanwhile, it turns out that Angel has a more immediate problem.  Namely, that the Demon Lords he killed in the Hell Moment, who, like him, are alive again, and aren’t particularly happy with him for ruining their good thing.  In retaliation, the demons Burge & Son have decided to kill Gunn, who is still recuperating and comatose in a hospital in Silverlake.  Angel and Spike and Betta George learn of this, and rush to Silverlake to intercept, but they needn’t have bothered … because Illyria is already there to keep the peace.

Crisis averted, Spike and George walk off together, and Angel visits Gunn’s room, leaving an Angel Investigations card behind before walking off alone into the moonset.  “My name is Angel.  I’ve done very bad things.  I’ve been told I’m destined to do worse.  But for now … I’m here to help.”

This issue marks the launch of a six-issue story arc entitled “Aftermath”, and features a new creative team.  Writing now is Kelly Armstrong, a Canadian fantasy author best known for her “Women of the Otherworld” series of novels, which feature supernatural characters in a contemporary setting.  So … yeah, I’d say she’s pretty much qualified for this gig.  The new artist is Dave Ross, also Canadian, who has quite a broad resume of Marvel, DC, and independent comics under his belt.  I’ll be honest, I miss Franco Urru a bit, but Ross is great replacement.  His action is always clear and dynamic, his demons are great, and his panel breakdowns are inventive and fun.  Now on with the recap …

Another month has passed, and much of Angel’s time these days is spent fighting of all the demon bounty hunters that the Demon Lords have hired to kill him.  He wants to start up Angel Investigations again, but can’t seem to get any help.  Connor isn’t interested.  Gunn is out of his coma, but is off finding himself, no doubt processing his own actions in the Hell Moment.  And Spike and Lorne are each doing their own thing.  Then along comes Kate the Ex-Cop back into his life.  As we know — but Angel doesn’t — she’s been a demon hunter herself all this time, and she not only gets behind his cause of starting a new agency, but helps him set up shop in an old church.

Unfortunately, Angel’s celebrity is proving to be a liability when it comes to finding legitimate clients who aren’t really out to meet him, sex him, kill him, or exploit him.  And then there’s the matter of the two magic-using individuals that pay Angel a visit, claiming to work for the government, as part of an initiative to deal with the magical “fallout” resulting from the Hell Moment.  Angel shrugs them off at first, but after an encounter with non-demon meta-human, he begins to believe their story.  He and Kate negotiate a deal with the agents, whereby they’ll magically deal with the crowds, paparazzi, and public interference, and in return, Angel Investigations will capture meta-humans and hand them over for “treatment”.  And … you know … nothing can POSSIBLY go wrong with that deal.

As the issue ends, Angel is about to be staked in his sleep by a werecat …