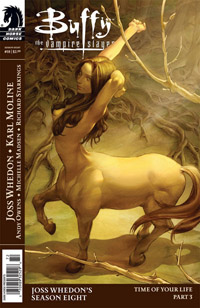 Yeah, I’d say that might be relevant. Time has certainly grabbed Buffy by the wrist. So is this all a test? A lesson? Is Dark Willow trying to teach Buffy something? Have Buffy and the Scoobies reached a turning point in the present time, and if they don’t make the right decisions, will Twilight destroy “The 500” (Slayers) and doom them to be forgotten by history? Is Fray’s Manhattan inevitable, or preventable? My guess is that the reason Fray knocks Buffy out at the end of the issue is because Dark Willow has told her that if Buffy goes back to her own time, and changes things for the better, then her (Fray’s) world may never exist. Thus, Fray is “saving the world” as she knows it. Fray and Buffy “want different things” — each to save their own world/reality. So assuming Buffy will succeed, are we actually witnessing the last days of Fray? Or does Joss have another trick up his sleeve?

Okay, so much for jumping to the end of the story. Rewinding now …

Buffy reads some Watcher diaries, learns that everything she and the Scoobies and The 500 have done is irrelevant. She and Fray go looking for a Lurk hunting party, find it, and Buffy finally learns what it feels like to be a Watcher, when the Watcher-less Fray goes running off to fight without a plan. Buffy finds Lurk Central, returns to the library to tell Fray, finds her sister Erin instead, they banter, and Fray — who’s been talking to Dark Willow — sneaks up behind Buffy to zap her with a ray gun. Rewinding again …

In the present day, Willow contacts the demon Saga Vasuki by means of … um … let’s just say it’s an “oral” incantation of sorts, and leave it at that. Ahem. Saga doesn’t offer much information that makes sense to Willow, but knowing what we know, my guess is that Future Dark Willow is who she’s been in touch with, and this is why she makes Willow promise not to look through the rift when she brings Buffy back. Presumably, because she doesn’t want Willow to know what became of herself in that reality. And if Dark Willow’s plan to change the past (if that is in fact her plan) succeeds, then whatever compelled Willow to use dark magic to survive for so long will never happen.

In Scotland in the present day, Xander and Centaur Dawn are on the run from the “flamey snakey ren-fair monsters” and run headlong into some tree people, who I have a feeling will end up being their allies against the army that Amy and Warren have sent against them. It’s easily the funniest scene in the issue, but there’s not much else to say about it.

As for the most teasingly cryptic line in the issue, that would be Buffy’s voiceover on the second page, after reading the Watcher diaries: “A few sketchy references that might be me, or my friends … some encouraging, some dire … at least one that’s too ridiculous to comprehend …” Too ridiculous? What is it??? Is it part of this arc, or is it a tease for something we won’t read about for ten more issues. Hard to say. Joss can be a bastard like that sometimes.