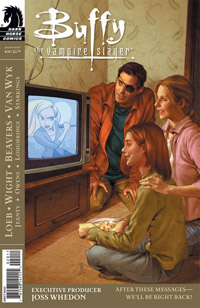 The story is straightforward and uncomplicated, with no mention of Twilight or any of the dramatic plot issues we’ve been dealing with this “season”. Buffy comes home from one in a long string of nights spent fighting demons, exhausted and dirty, falls asleep in Xander’s bed, and in the spirit of “Peggy Sue Got Married”, wakes up as a teenager in Sunnydale with all of her adult memories and knowledge intact.

With the transition to the past, the art reverts to the cartoony style that would have been used in the animated series, and the tone reverts as well, reminding both Buffy and us of simpler days. Days when her mom was still alive and still clueless about Buffy’s Slayer nature. When Cordelia was still a superficial bitch, Snyder was principal, Xander had two eyes, Giles was in charge, Willow liked boys, Dawn was a preteen (something we never actually saw), and before Angel lost his soul and got sent to Hell. Along the way, this happens, that happens, and some vampires are killed, but not before summoning the same dragon we see in the promo for the animated series. Buffy defeats it … and she wakes up again.

It’s unclear whether it was all a dream or some demon-induced trial, but in the end, it doesn’t really matter. Buffy is reminded that the past wasn’t really any better — or worse — than the present is. Just different. It puts the events of recent months into perspective, and centers her for the trials that lie ahead.

And we’re left thinking how much fun that animated series could have been. If only.