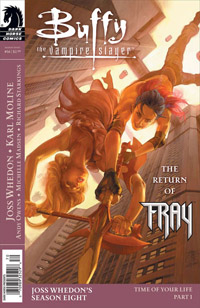 When Willow says, “Ah, quitcher grousin’,” and, “No no, you’re making up made-up things,” Joss is not only writing in the voice of a character he created, but also in the voice of the actress who portrayed her. And that’s just all kinds of awesome to me. And a little saddening too, because of course it makes me miss the TV show.

As for Melaka Fray, as it turns out, we don’t get much of her in this issue. Just a quick flash-forward of she and Buffy fighting in mid-air at the beginning, and her putting the smackdown on Buffy at the very end. The bulk of the story deals with how Buffy ended up in Fray’s time in the first place. As for that, according to Willow, it has something to do with a big honking temporal rift that’s sitting between them and the far future, which is connected in some way to the Slayer Scythe, which both Buffy and Fray possess. The rift and some intel from Willow’s “snake-body demon lady” friend are what’s actually brought them to New York City, and once there, the Scythe seems to have yanked Buffy forward in time, swapping her with a demon.

Sorry, I seem to be recapping things in reverse order. Like Buffy said, “Starting with, not chronologically, but in order of immediate importance.” Buffy encounters Fray. Willow reunites with Kennedy, who threatens to kill Buffy “like a chicken” if she puts the moves on her girl. Skinless Warren — working for Twilight — blows up Castle Scooby in Scotland with a magic missile, as Xander watches it happen from a distance. Oh, and Dawn changes from a giant human into a normal-sized centaur … and for some reason, she isn’t happy about it. Teenagers!

According to Willow, this is probably the second of three transformations for Dawn. And I can’t help but think there’s a Gulliver’s Travels theme going on here. First, she’s big like Gulliver was on the first part of that book. Now, she’s part-horse — and there was a race of intelligent horses (Houyhnhnhms) in the fourth part of that book. If the pattern carries through, my guess is that Dawn will end up either very old or ghost-like for her third transformation, since that’s what Gulliver encountered in the third part of his journeys. Or I’m reading too much into things, and I’m completely wrong.

Anyway, I loved the issue, and can’t wait to see where this arc goes. After all, anybody who knows me knows I love a good time bending story!