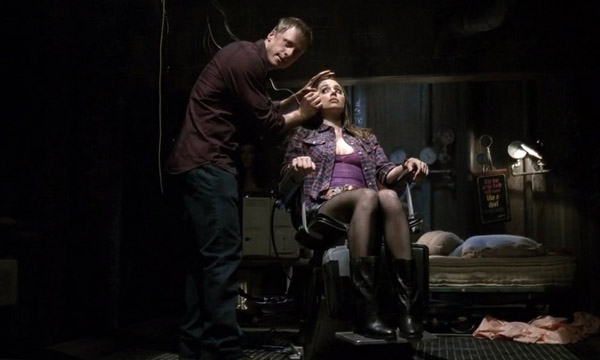 Chronologically, here’s how it all went down …

There once was an Active named Alpha.  He used to be in prison for some violent behavior involving knives, and was well on his way to becoming the next Ted Bundy.  Then the Dollhouse made him an offer — let us wipe your brain and turn you into a prostitute for five years, and you can go free.  He took the deal, Alpha was born, and quickly became the number one male doll in the house, frequently paired in missions with the number one female doll, Whiskey.

Then along came an Active named Echo.  Alpha fell in love with her, and to prove his love, used his mad knife skills on Whiskey’s face, to destroy her beauty and thereby make Echo the number one doll.  It worked.  Echo became “the best” and Whiskey became Dr. Saunders.  Of course, the role of Dr. Saunders was only available because Alpha killed the real Dr. Saunders, along with some other folks, shortly after accidentally getting his head pumped full of every persona he’d ever been programmed with.  Then he escaped the Dollhouse.

Then along comes Ex-Agent Ballard, who is not an Active (that we know of), but who is so eager to find the Dollhouse to rescue Echo — who is really Caroline — that he accidentally lets Alpha back into the house.  Alpha cuts up Victor, reminds Dr. Saunders that she’s really Whiskey, then puts a bad girl persona in Echo and they leave the Dollhouse.  They steal some some clothes, steal a waitress, and take her back to Alpha’s evil lair, where — with his own rig — he puts Caroline into the waitress, then pumps Echo full of every persona she’s ever been programmed with, and tells Echo to kill Caroline.

But in the same way that Alpha’s original serial killer soul has bled through into his uber-self, so does Caroline’s hero soul bleed into her uber-self, and as a result, instead of killing Caroline, she turns on Alpha, and wacks him in the head with a metal bar.  She decides to assimilate Caroline, and add her distinctiveness to her own collective mind.  But before she can, Alpha wakes up, shoots Caroline in the neck, then threatens to shoot the hard drive that contains Caroline’s persona.  There’s more fighting, some bluffing, some chasing, Ballard joins in, and in the end, Alpha escapes and Echo’s persona is saved.

One very rushed epilogue later, Echo gets wiped again as if nothing happened.  Dr. Saunders is allowed to retain her awareness of being Whiskey.  Victor is no longer pretty, but they seem to be letting him sleep in one of the stasis pods anyway — maybe there are some old rich women out there who like scarred men?  Ballard agrees to join the Dollhouse on a contractor basis, in exchange for the setting free of Mellie/November, and we’re left to wonder if he’s really joining them, or if he’s just letting it look that way, so that he can further the agenda of whatever anti-Dollhouse organization has talked him twice now — once through Echo and once through November.

And that’s that.  All in all, I have to say that while I liked having the loose ends of Alpha’s and Whiskey’s pasts tied up for me, this episode wasn’t quite as satisfying as the last one was.  Things definitely felt rushed between the final action scene and the epilogue, almost as if a scene or two were edited out for time.  Makes me wonder if there’s a 90-minute version of the episode that was cut down to 60?  Guess we’ll find out when the DVD is released.  Also, Echo just getting wiped again and things going back to normal in the Dollhouse seemed anti-climactic.  I kind of expected something more dramatic — like Uber-Echo and Ballard hitting the road to take down all the other Dollhouses in the world.

So I’m intrigued to see a Season 2 for this show, but I have to say that overall, Whedon didn’t do as good a job as  he could have of clarifying and selling the premise after 12 episodes.  The show got stronger in the last few weeks, but the overall concept never quite crystallized all the way for me.  I’ll definitely watch it if FOX brings it back, but if it gets cancelled, I can’t say I’ll be nearly as sad as I was when Firefly got the boot.