So True Blood had its season finale last night. Who else out there was watching it? If you weren’t, but you plan to catch it on DVD or something, then you probably don’t want to click through and read the rest of this post. Suffice it to say, I enjoyed the first season immensely, thought the finale did a satisfying job of wrapping the storyline up, and can’t wait for the second season to begin.

END_OF_DOCUMENT_TOKEN_TO_BE_REPLACED 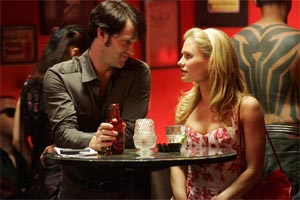 END_OF_DOCUMENT_TOKEN_TO_BE_REPLACED

It’s that time of year again, when leaves will soon begin to fall off the trees, and DVRs will fill up with either new television shows or new episodes of old television shows. Here’s the new sci-fi stuff I’m planning to watch next week and why …

Terminator: The Sarah Connor Chronicles, Season 2
(Monday, FOX, 8pm EST) The first season of this show started off a bit uneven, but really hit its stride about midway through, particularly after the introduction of Derek Connor from the future. And holy crap, the last half-hour of the season finale? That pool scene? Johnny Cash’s “The Man Comes Around”? I still get goosebumps. If you haven’t already seen Season 1, or just want to watch it again, FOX has full episodes up on their website. Or you can always just go back and read my recaps. END_OF_DOCUMENT_TOKEN_TO_BE_REPLACED