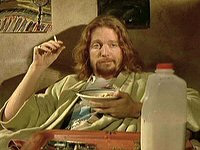 Here’s an early sneak peek at Caprica, the Battlestar Galactica prequel series, due to launch in December 2008. Eric Stoltz has signed on to play “Daniel Graystone, a wealthy computer engineer who, after an emotionally crippling family tragedy, uses his technological wizardry to forever change the future of Caprica.”

In other words, you’re looking at the father of the Cylons.

Hop over to Wikipedia for more detailed info about the new series.