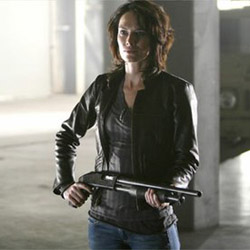 “Terminator is far from being terminated.”

Apparently, FOX ordered the “back nine” episodes of the Sarah Connor Chronicles late on Friday, filling out the full second season order.  This, despite the fact that the ratings haven’t been great so far this season.

No reason has been given for the pick up yet, but it may have something to do with a desire to cross-market with the pending Christian Bale Terminator movie.  Or the critical attention the series has received this season.  Or the fact that Dodge doesn’t want to lose its advertising vehicle (pun intended).

Whatever the reason, I’m happy!