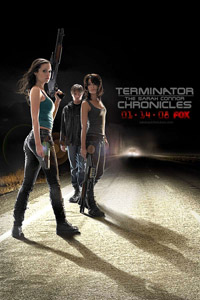 The Sarah Connor Chronicles will return in the fall.

“Not only has Fox has picked up Terminator: The Sarah Connor Chronicles for a second round, the show is returning in the fall.”

“[The show] premiered in January as a midseason drama, but Fox is shifting the show to its fall lineup for next season. The network on Monday handed a 13-episode order to the sci-fi drama [which] will likely get a new time period next fall rather than stay at Mondays at 9 p.m. NBC puts the similarly sci-fi tinged Heroes in that slot, which was on hiatus due to the writers strike when [the show] aired this season.”

“The series could also get an early back-nine order… Next May, Warner Bros. will release the fourth ‘Terminator’ film, which could make for some ideal corporate synergy should the TV series survive the fall.”

“[The show], which launched in January, is the highest-rated new scripted series this season among adults 18-49 with an average of a 4.4 rating/10 share. The Warner Bros. TV-produced series drew an average of 10.5 million total viewers.”