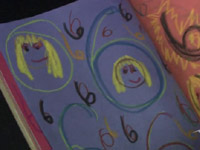 Trust issues were the order of the day on this week’s episode of Battlestar Galactica. Gone are the days when the Humans and Cylons played cat and mouse, chasing each other through space. And Adama probably daydreams about the good old days when there were only one or two secret “skin jobs” on his ship.

Now there’s a base ship in the Fleet with Humans on it … a variety of Twos, Eights, and Sixes prancing around the Galactica … and it’s become common knowledge among Humans as well as Cylons that the Final Five are somewhere within the Fleet, and that they know the way to Earth. And while you might think that occupying the same spaces and having the same goal would force everybody to trust each other, just the opposite seems to be true. The Humans and Cylons each have plans to back stab the other at the earliest opportunity.

Part of the problem is that there are still those on both sides with hidden agendas, which complicates things. The Semi-Final Four are naturally a bit leery of unboxing D’Anna and having themselves revealed. So when Tigh advises blowing up the whole frakking Resurrection Hub*, boxing facility and all, his motives are hardly pure. The Sixes have plans for Athena’s hybrid daughter Hera, and Hera herself seems to be complicit in whatever those plans are. This drives an even bigger wedge between Athena and her Cylon siblings than the one that already existed, and results in the death of Natalie Six by Athena’s hand. And now, as Natalie herself so eloquently described it to the Quorum, that death is permanent.

On the Human side of the fence, Roslin learns that Tory has been frakking — and worshiping — Gaius Christ, and Tory seems genuinely distressed by this. I’d begun to think her loyalties were either purely Cylon or purely Tory, and wouldn’t have guessed that she still cared what Roslin thought of her. Nor would I have guessed that Tigh put so much stock in Roslin’s visions — although I tend to think he doesn’t, and that this is just part of the ruse to keep him from being revealed as a Cylon.

There are some telling moments of trust, though. Before she dies, Natalie Six argues strongly with Leobon and Sharon that they should come clean with the Humans about their plans, but she’s outvoted. Roslin comes clean with both Lee and Baltar about the “opera house” visions she’s sharing with the Cylons. Then Starbuck shares with Roslin part of what the Hybrid told her, and suddenly Roslin — who moments before was still accusing Starbuck of being a Cylon — is pleading with her to help her understand her visions. The result is that Starbuck takes her to the Hybrid … and then the base ship jumps, with the President still on board.

And through it all, there are sad recurring scenes of Gaeta losing his leg but gaining a voice, crooning a haunting song that sounds Irish and bit like the show’s opening theme. It’s an original piece created by the show’s composer, Bear McCreary, called (not surprisingly) “Gaeta’s Lament”, and he discusses it in fascinating detail over on his blog. In particular how the line, “To have her please just one day wake,” was used to punctuate the waking of the Hybrid in that final scene. Like the use of “All Along the Watchtower” in last season’s finale, it’s amazing how much depth the music sometimes adds to this series, particularly in an episode like this one.

And now, since it was all spelled out so clearly at one point this episode, here’s a verbatim breakdown of what’s going on with all the boxing, unboxing, and hubs …

* “The Threes, the D’Annas, were boxed after the battle on the algae planet. Her entire line was punitively deactivated, her consciousness placed in a boxing facility. D’Anna saw the faces of the Final Five, which was forbidden. But if we unbox her, she can reveal their identities to us. The Final Five have been to Earth. If we help find them, they can help us get there. The boxing facility resides within the Cylon Resurrection Hub. This hub controls the functions of every resurrection ship in existence. It protects itself by periodically jumping to a new set of coordinates, and then relaying them back to the base ship. You destroy the hub, the Cylons lose their ability to download.”