I’m blessed with family and friends who know me well enough to give me some awesome geek gifts for Xmas this year. Thought I’d share a few of my favorites with you, in no particular order …

Frakkin Toaster T-Shirt
Freakgirl got me this awesome shirt, which I’m psyched to wear at the NY ComicCon in February, where folks aren’t shy about telling you when they like your t-shirt. If you don’t understand the joke, I’m not explaining it to you — just trust me that it’s funny.

Iron Man DVD Set with 3 Bobble Heads
Freakgirl gave me this too — a two-disc set, which includes bobble heads for the Mark 1, Mark 2, and Mark 3 suits. Trifecta! I look forward to playing with the bobble heads while I watch the DVD extras one day soon. You know, after I watch the movie five more times.

END_OF_DOCUMENT_TOKEN_TO_BE_REPLACED

According to Marvel Comics, it’s official. We’ll be seeing the Iron Man sequel in May 2010 and the first (live-action) movie featuring The Avengers in July 2011. The only lineup they’ve committed to so far for The Avengers is Captain America, Iron Man, Thor, and the Hulk …

END_OF_DOCUMENT_TOKEN_TO_BE_REPLACED 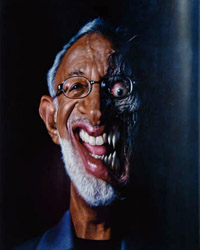 If you’ve seen Terminator, Aliens, Predator, The Thing, Jurassic Park, Edward Scissorhands and even this year’s blockbuster hit Iron Man, then you know Stan Winston’s work. He is an Oscar-winning special effects and makeup genius, and more importantly, has been a staple of my geeked-out movie-going experiences over the years. Sadly, he passed away yesterday at the too-young age of 62, after a seven year struggle with cancer.

Thanks for the memories, Stan! You will be sorely missed.

To learn more about Stan Winston’s life and work …

Photo courtesy of The Winston Effect, a deluxe retrospective of his work, available from Titan Books.

But why quibble? No matter what you call this movie, Iron Man rocked.