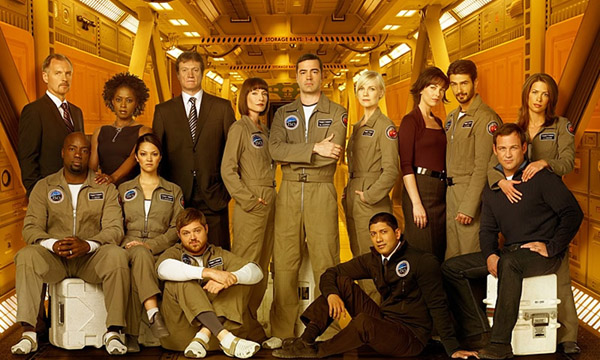 To be honest, I only became aware of this show because I happened to be poking around the schedule on the DVR one day, saw the description, and set it to record the first episode.  The ratings haven’t been great (or “stellar” as the clever pundits have said), and there appear to be no episodes scheduled after the eigth one — which airs next Sunday — so it’s entirely possible the show will already have been canceled by the time you read this.

Basically, it’s a show about a crew of (mostly) pretty astronauts who embark on a multi-year mission to reach Venus.  There’s a requisite amount of sexual tension between various members of this crew, and liberal flashbacks both to a previous disastrous Mars mission and to the training process for the Venus crew.  And no, it’s probably not a coincidence that the writers chose Mars (where men are from) and Venus (where women are from) as the destination planets.  Added to the mix is some mysterious force that resides both at Ground Control and in a pod on the ship, which makes people hallucinate and seems to be calling the shots and will probably never be explained before the show gets cancelled.

So it’s a quirky little show — part sci-fi, part soap opera, part trying to be Lost with the whole mystery thing — but I have to say, I’ve really enjoyed it.  I’m not always a fan of voiceover narration, but Ron Livingston’s voice is well suited to it.  And while some people might consider the storytelling too “tidy”, I actually appreciate that each episode has some kind of canned theme that applies to all of the ongoing plot lines.  More than a few times, I’ve been touched by certain scenes, and I’m genuinely interested in what will happen with these characters … even though, as mentioned twice now, the show will probably be cancelled.

Maybe if I say it enough times, ABC will just decide to prove me wrong?  But even if not, it was still a nice diversion for the summer, in between the dozens of Twilight Zone and Enterprise episodes I watched.  If you haven’t already watched Defying Gravity, and are curious to, most of the episodes are available for viewing on both the ABC website and Hulu.com.  Let me know what you think.