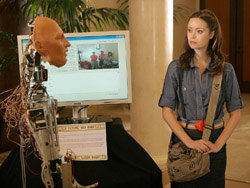 Well, it happened. I knew it would. After the first 4 or 5 episodes of a sci-fi series, either I decide it’s simply not worth my time — as most recently happened with Flash Gordon and Bionic Woman — or the other thing happens … I get hooked. The latter happened for me with this week’s episode of The Sarah Connor Chronicles. The premise has been firmly established, a few ongoing plot lines have been set in motion, the characters have become familiar, and now it’s as if the writers have just pulled up in a truck and said to me, “Come with us if you want to live.”

Anyway, here’s the breakdown …First off, I have two words for you: “GuIDANce Counselor”. Enough said about that. Except, how funny was Cameron during that scene? As pointed out in the most recent episode, Summer Glau is really managing to pull off a version of this character that is more often downright creepy than funny, which keeps her from coming off as silly. If that makes any sense.

Okay, so Andy Goode enters the scene again as the potential father of Skynet, when he calls Sarah to let her know that her burning down his house (which he of course doesn’t know was her) was a good thing. Because in recreating Turk, he’s made him better than ever. Bottom line, he enters Turk in a chess competition, and Turk loses, but somebody — not one of the Connors or Cameron — kills him anyway. The most likely suspect is Derek Reese, brother of Kyle Reese, John’s father. Did NOT see that coming! Well played writers, well played. And did I mention he’s being played by 90210’s Brian Austin Green?

Sarah visits Derek in jail, finds out who he is, then helps him escape from both the police and from the T-888 cyborg that killed the rest of his Future Unit back in the second episode. Cameron takes the terminator down and removes its hard drive, effective disabling it. But Derek has been shot up a bit during this encounter, and in order to save his life, John makes an executive decision: he goes to fetch Sarah’s ex, Charlie Dixon, who is an EMT.