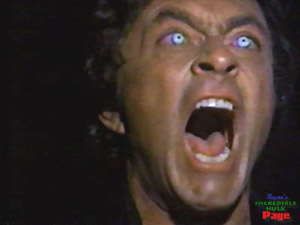 Something has just pissed you right the hell off. Maybe it’s the loser in the cubicle next to yours whose cellphone ring tone is “La Vida Loca” and whose mom calls him 50 times a day. Maybe some douchebag on the Jersey Turnpike just crossed two lanes of traffic (without a turn signal) to sit in front of you and go 40 miles per hour. Or, more likely than not, you’re just a Democrat, and those rage-inducing bastards over at FOX News are getting you all hot under the collar again.

Whatever the reason, you’re mad as hell, and you’re not going to take it any more. You can feel the change coming on, and it don’t feel fine. The gamma radiation in your blood stream not only makes your eyes glow, it bubbles up inside of you, creating a large pocket of gas that feels like a sharp dagger wriggling through your intestines. Kind of like a much worse version of how you felt an hour after the last time you stopped at Taco Bell on the way home from drinking that one night, and made the mistake of ordering the Baja Fiesta Cheesy Gordita Beanito Supreme. Never again! 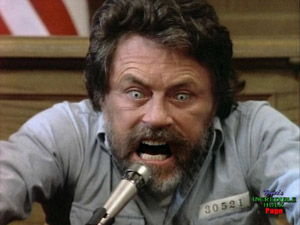 Now things get interesting. Remember that beard you tried to grow when you were 16, and it came out looking like somebody had glued pubic hair to your face? (And later, you found out that your best friend actually HAD glued his pubic hair to your face? That was so NOT cool, dude.) Well consider this stage a big green middle finger to everybody who pointed at you and laughed back then (including your best friend), because ZZ Top is in the house now, yo!

What’s happened is that gamma rays are infusing your sebaceous glands, causing rapid facial hair growth. If it lasted more than a few seconds, you’d probably end up looking like the love child of Grizzly Adams and Rip Van Winkle. Sadly, super-mutated hormones being what they are, hair growth is only half of the story. Because your voice is also changing. So whatever you do, try not to talk during this stage if you can at all help it. You may look like a bad-ass Charles Manson, but you sound a lot more like Peter Brady. “And when it’s time to CHANGE, you’ve got to rea-RRANGE! …” 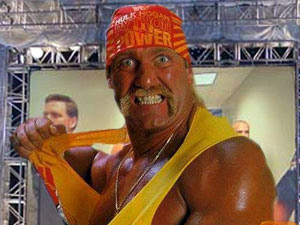 This is admittedly one of the more bizarre aspects of gamma-induced transmutation, and the one least understood by specialists in the field of Hulkology. For some reason, all of your hair goes blond, your skin turns a deep tan, and you suddenly resemble an old-school WWF wrestler. No, not Bob Backlund. Or Superfly Jimmy Snuka. Or even the Iron Sheik. That other one. The Atomic Leg Drop guy … whats-his-name.

Anyway, your muscles begin to develop at an exponential rate, and with them, your opinion of yourself inflates to dangerous levels. The good news is that your voice finally settles into a gravelly baritone. The bad news is that you cannot resist the urge to yell everything single thing you say. (“Whatchoo gonna do brother, when I put this Pop Tart in the toaster?! Yeahhh!!!”) Or the urge to flex your muscles and rip your shirt off in public. In extreme cases, you may even choose to make a string of cheesy B-movies or pimp your daughter in a shameless attempt to further your own career. So be very careful. 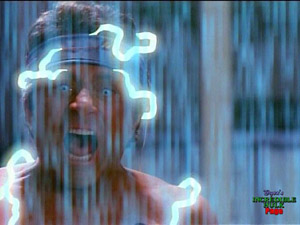 Step 4 – The Finger In The Socket Stage:

At this point, your gamma-irradiated hormones overwhelm you entirely and create a cascading feedback loop that ripples like electricity across your body. Your newly-grown facial hair is singed away, and your stomach pains are replaced by the altogether unpleasant sensation of somebody attaching a car battery to your genitals. (Which you know about all too well, because it’s something else that your best friend did to you in high school once. Seriously, WTF dude?!)

During this stage, it is critical that you step away from your computer, your TiVo, your iPod, and anything else that utilizes magnetic storage. Otherwise, they WILL be erased, and that vintage collection of “Simpsons” WAV files on your hard drive will be lost forever. And really, how could you stand not hearing Homer go “Woohoo!” every time you get an email or “D’ohh!” every time you hit a wrong key? So don’t take a chance. Resist the urge to see who just “poked” you on Facebook, and read a magazine or something.

Oh, and you might want to refrain from petting your cat too. 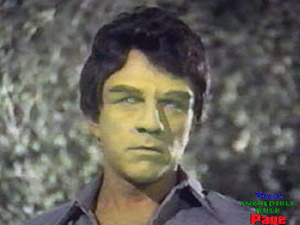 The less we talk about this stage, the better. It passes very quickly. Just ride it out. 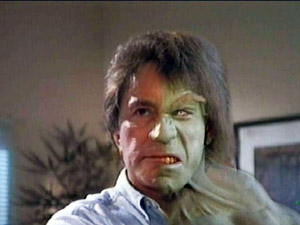 Halfway through the overall transformation, your normal body tries to assert itself. This condition can be particularly convenient if you happen to start changing during a big date. If by some quirk of chance your date failed to notice the beard, was off powdering her nose when you morphed into a wrestler, believed you when you said you have a “real problem with static electricity,” and was blinking when your face turned green, then this stage should be relatively easy to get through. Simply turn to the left, so that your date can only see the right side of your body, and she’ll be none the wiser.

At least until the next stage … 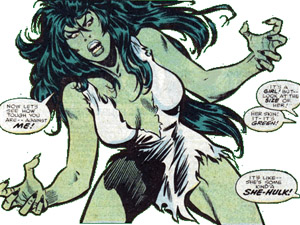 Um. Okay, I’m not going to lie to you. This is a tricky one. You totally need to make sure you’re not in public by the time you get to this point, or you’ll have flashbacks of that time your best friend put women’s lingerie and a wig on you on you while you were sleeping, took pictures, and posted them in the halls at school. (Shit, I forgot that even happened until just now. Why was I even friends with him?)

Anyway, do you remember when you were in the throes of puberty, and you used to wonder what it would be like to have breasts? How you used to think that if you had boobs, you’d just sit in front of a mirror for days on end touching them? Well, if you ever imagined those breasts to be bright green, with nipples LITERALLY as hard as diamonds, then you may already be one step ahead of the game here.

Just be very careful if you choose to explore your new body during this stage. Because the temptation will be there, but caution is absolutely critical. I cannot stress this enough. The strength of a thousand men comes in extremely handy when throwing an armored tank over a mountain, but yields decidedly less pleasant results when unintentionally applied to erogenous zones during a moment of self-passion. You’ve been warned! 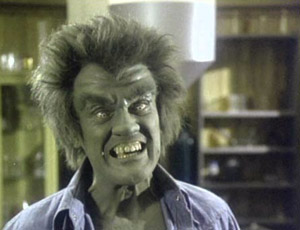 Fortunately, the She-Hulk stage comes and goes quickly. (A little too quickly for some guys.) But in its wake, you’ll experience this pleasant bit of awkwardness. Right about now, jokes about “boobies” may seem especially side-splitting and snort-inducing. You may suddenly realize that you have instant recall of every line of dialogue from “The Empire Strikes Back” (and most lines from “The Phantom Menace”). You may even find yourself digging around in the closet looking for that old bag of polyhedral dice and the character sheet for that 28th level Gray Elf you spent so much time building up during junior high.

Just go with it. Don’t fight it. You may not get many dates during this stage, but if you apply yourself, there’s a good chance you can beat your top score on Guitar Hero. And maybe even get rich by inventing a new operating system or search engine algorithm. But most likely, you’ll just sit and stare at your funny-looking green “junk.” And that’s fine too. 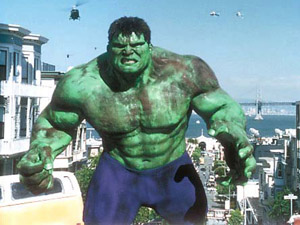 Things are moving fast now. Suddenly, the gas problem returns, your body inflates, and you wonder when exactly it was that you turned into a giant Macy’s Thanksgiving Day Parade float. And how you got so damned dirty. Then you remember that in 2003, you slogged your way through a movie that was 40% hot air and 60% shit, and it all makes sense.

The best you can do right now is pull up a chair, pop a Gas-X, maybe have a beer with Underdog and Pikachu, and wait for the swelling to go down. You’re almost home free. 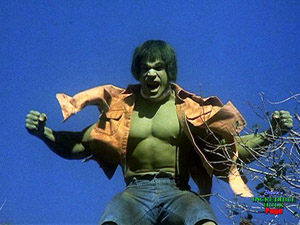 The transformation is complete, and you have arrived. Congratulations!

After a quick shower, you’ll find that life is much easier. Sure, the military will hunt you down like a dog. But as the Hulk, you’ll find that you’re free of conscience, unfettered by fashion worries, and that you never have to wait in long movie lines or for a table at restaurant. Not to mention, you are now free to take your co-worker’s cellphone and toss it into a low orbit around Mars. Or chase down that pesky car that cut you off on the Turnpike earlier, and snap it in half like a fortune cookie. Who knows — you might even decide to pay a visit to that best friend of yours from high school …

3 thoughts on “Hulking Out in Ten Easy Steps”