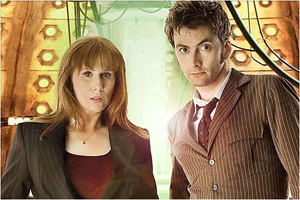 Even though it’s easily in my Top 5 List of shows right now, for some reason, I don’t ever get around to posting about Doctor Who. I’m not sure why. Maybe because it’s on Fridays, but I sometimes don’t get around to watching it till Sunday, and in any case, I’m already distracted by other things on Monday, and it just doesn’t occur to me. Or maybe because it’s so good and clever and funny and well-written that I’m afraid I can’t do it justice, so I don’t even try. Regardless, this week, I have to post about it. Because the latest episode (here in the States anyway), “Turn Left,” was just SO good that I can’t stop thinking about it.

So much happened in this episode that I should probably watch it again before I try to say anything intelligent. And while I think I will watch it again, I think I won’t wait. (Sorry for all the Ws there.) Because I’d rather watch this one again after I’ve gone back and re-watched all of last season. Because that’s the point, right? Okay, rewinding …

Innocently enough, Donna goes to get her fortune read in some tent on some planet, and unbeknownst to her some creepy Time Beetle crawls up on her back, and the fortune teller makes her think about a pivotal point in her life — the moment when if she had turned right instead of left, she never would have met The Doctor. The fortune teller gets her to isolate it, and somehow the Time Beetle makes that moment real, and Donna turns right … and everything changes. Now, everything that happened starting with the “The Runaway Bride” episode that kicked off Season 3 — which is when The Doctor first met Donna — won’t happen the way it did before.

Basically, everything goes to hell. Donna isn’t there to keep The Doctor from drowning in the Racnoss lair under London, and so he dies permanently, without regenerating. The Doctor isn’t there to save Martha Jones when the rhino aliens take her hospital to the moon, so she dies too. Sarah Jane Smith has apparently tried to take The Doctor’s place in his absence, but she’s not up to the task, and also dies. Nobody is there to stop the Titanic from crashing during the Kylie Minogue episode, and so London is destroyed. Most of the United States is overrun by the little creatures made of fat that used to be people. The Sontarans make their play to poison the Earth, and (presumably) Torchwood is just barely able to stop them … but they die too. And then the stars begin to disappear.

And every time one of these things happens, I want so badly to just pause, go back and watch the episode in question, and see how good the continuity is. Because you just know it’s dead on. Few things are more entertaining to me than: 1) a good time-travel story; 2) a good alternate reality story; and/or 3) a story that gives you something you’ve already seen from a different perspective. And this story was all of those things, wrapped in a bow.

Meanwhile, through all of this, Donna keeps getting visits from Rose. Rose! Who we’ve been seeing glimpses of all season. Well … at least twice, right? In the season premiere and during the “Midnight” episode. We’re still not sure how Rose was pulling this off, but she does somehow. And eventually, she’s able to convince Donna of what’s going on, and with a jury-rigged TARDIS, sends Donna back to that pivotal day, where, in a final NOBLE gesture (see what I did there?), she throws herself in front of a truck, which causes a traffic jam, which prevents her from turning right. She turns left, and everything reverts back again, and the Time Beetle dies.

And before the memory of what happened has a chance to fade from her, like a dream, Donna tells The Doctor about everything. Including the girl who helped her. A blonde girl. Who whispered two words into her ear, which she was supposed to tell The Doctor. And we the viewers know what the words will be before we even hear them. I half-suspect that the writers will screw with us, and make Donna forget them before they leave her lips. But she doesn’t. “Bad Wolf,” she says. And a terrified Doctor runs outside to see that the words “Bad Wolf” are everywhere, on banners and posters and walls … and on the TARDIS itself, which has alarm bells ringing. When Donna asks what’s going on, what’s bad wolf, The Doctor replies: “It’s the end of the universe.” Cue the cool Doctor Who theme music.

For those who don’t remember, “Bad Wolf” is the phrase that Super Rose (energized with the power of the Time Vortex) seeded the universe with back in Season One, as a way to lead her normal self and The Doctor to where they needed to be. Or something like that. During her “Super” phase, Rose also made Jack Harkness immortal, and gave The Doctor the time he needed to regenerate. And considering the events of this episode, it’s possible that Super Rose also did something to allow her future self to cross back over to our universe, even though according to The Doctor it could never happen.

More answers are presumably forthcoming when we get the Season Finale next week and the week after that, which according to the preview has an all-star cast of Doctor Who and Torchwood alumni.

Now I just have to decide if I’m going to patiently wait for the finale on SciFi, or if I’m going to be impatient, and seek it out on the torrents. Because I know the UK has already seen it, which means it’s just a matter of time before I get spoiled.

5 thoughts on “Doctor Who – It's a Donna Noble Life”