Daleks and Davros and Reality Bombs, oh my! Here’s the short version …

Davros, with the help of some new Daleks he’s created, yanks twenty-seven planets out of space (and time), including Earth, and lines them up just so, for the purpose of creating a “reality bomb” that will destroy (or “uncreate” really) everything in existence except the Daleks. But The Doctor and his friends stop him, and everybody lives happily ever after. THE END.

Okay, so it’s a little LOT more complicated than that. Here are the high points … 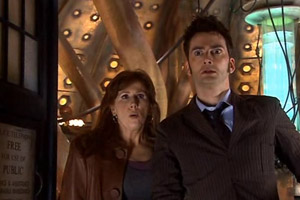 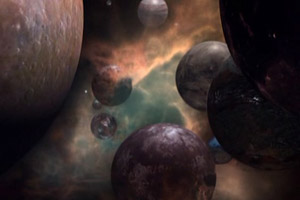 When the Earth disappears, The Doctor visits The Shadow Proclamation — the folks in charge of the Judoon (Rhino Police) — and finds out what he needs to know about Earth and the other 26 disappearing planets, then pretty much tells them to bugger off. What he learns puts him on the trail of disappearing bees and the Medusa Cascade (some kind of temporal rift), which then leads him to determine that the Earth and the other planets exist one second off normal in a pocket dimension. (And here I thought debugging some Javascript on one of my websites was a hard job.)

Meanwhile, on Displaced Earth, the Torchwood team, Sarah Jane & Son, Martha Jones & UNIT, and Rose Tyler with Donna’s family are all contacted by former Prime Minister Harriet Jones using a sub-wave network created by the human-looking alien dude who The Doctor brought to Earth at the end of the Titanic Christmas episode. Joining all their technologies, the Friends of Doctor are able to reach outside the pocket dimension to call him — “Can you hear me now?” — and he and Donna come running. But the second he gets there, The Doctor sees Rose, loses focus, gets shot by a Dalek, and is forced to regenerate … leaving us to wonder for a week if it’s the last we’ll ever see of David Tennant. 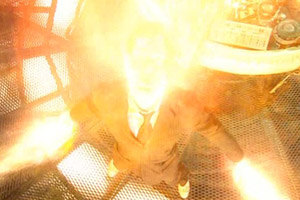 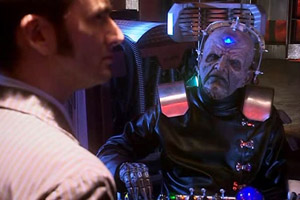 As it turns out, The Doctor regenerates only enough to heal, then siphons the rest of the energy into his “spare hand”. (When did he get that back from Captain Jack?) As the TARDIS is about to be destroyed, Donna touches the energized hand, and as a result, a new Donna Doctor and Doctor Donna are created, the latter seemingly the Doctor but human and mortal, with only one heart, and the former seemingly Donna, but with Time Lord knowledge crammed in her head. But I’m getting ahead of myself …

In between the regeneration and Donna getting Doctored, pretty much everybody gets captured by the Daleks. Davros reveals his evil plan, and we find out that most of it is predicated on the ramblings of Dalek Caan (“Caaaaaaannnnn!!!!”) of the Cult of Skaro, who we last encountered in 1930s Manhattan, building the Empire State Building for the purpose of turning all humans into Daleks. His emergency time jump after that failed plan plopped him in the middle of the Time War (between the Time Lords and Daleks), where he saved Davros, and went insane in the process — but also became prophetic.

Unbeknownst to Davros, Dalek Caan has actually orchestrated most or all of the coincidental events that have brought The Doctor and Donna together, because he believes that the Dalek race is evil and needs to be destroyed. And in the end, it is, when — after Doctor Donna thwarts Davros’ plan and the three Doctors send back every planet but Earth — Donna Doctor flips the switch that sets off a chain reaction that kills every remaining Dalek, including Davros, who refuses to be saved. Bad Donna Doctor! 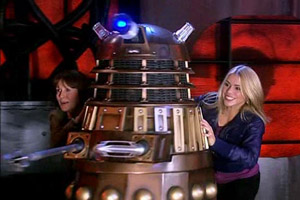 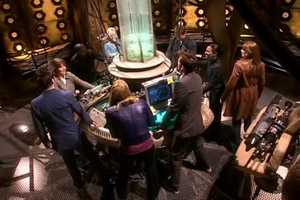 With the Dalek threat eliminated, all that remains is to get Earth back home again. To do this, The Doctor takes advantage of having so many friends to fly the TARDIS “like it’s meant to be flown” — with six pilots instead of just one. Using the Torchwood rift in Cardiff as a “tow rope,” and with the help of some coding wizardry from none other than K-9 (“Good dog!”), The Doctor and his crew fly the Earth back to its usual location in a fanfare of angelic music. Brilliant!

Seriously, if you weren’t jumping up and down in your seat at that point, you might just be a Cyberman. Get yourself checked out.

In the end, Earth gets home safely. Sarah Jane returns to her son. Martha and Mickey leave with Captain Jack. The Doctor drops off Rose, Jackie, and Donna Doctor at Bad Wolf Bay in the parallel universe. Apparently, Donna Doctor, having been “born” in the heat of battle, is too volatile for this universe, and so — in a happy romantic ending seemingly torn from the pages of fan fiction — Rose finally gets to have her Doctor, who, because of his human side, will grow old and die with her.

But the other side of the equation is not so happy. Because Doctor Donna’s human brain is busting at the seams trying to hold on to a head full of Time Lord knowledge. In order to keep her from dying, The Doctor must wipe all memories of himself and the TARDIS from her mind, and warns her mother and grandfather that if she ever remembers him, even for second, she’ll “burn up.” But the up side is that Donna’s mother now has a new found respect for her daughter, and one hopes that this will ultimately improve Donna’s opinion of herself over time. 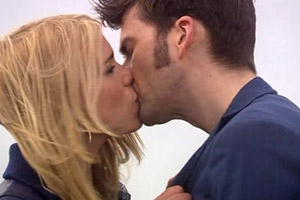 And then the Whoniverse squeed. 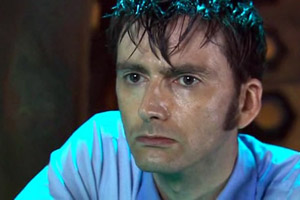 “Wait. Why did I reward the Bad Doctor again?”

And so, once again, The Doctor is alone. This time without even so much as a cliffhanger ending. Only himself, and the TARDIS, and his own thoughts. And two more years until the next season begins. Oy! But never fear … there will apparently be a handful of specials between now and then. And when the show returns, Steven Moffat — writer of episodes “The Empty Child”, “The Girl in the Fireplace”, “Silence in the Library”, and one of my all-time favorites, “Blink”, as well as the awesome series Jekyll — will be the head writer. So I expect only fantastic things for this franchise in the future.