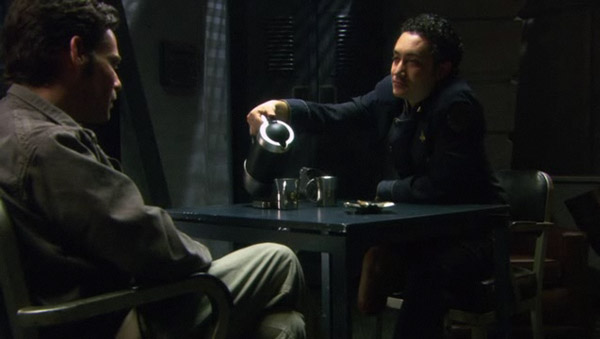 Long Version: First, let’s deal with the resolutions to last week’s two big cliffhangers. As it turns out, the grenade that was lobbed into the room where Adama and Tigh were making their last stand was a concussion grenade, not an explosive one. So Tigh gets thrown in the brig with the rest of the skin jobs, and Adama is brought back to the bridge. Meanwhile, Roslin’s/Baltar’s escape ship doesn’t actually get shot down, because Hot Dog has a change of heart once he finds out the president is on it. Which delays things enough for them to evade and make their way safely to the Cylon base ship.

Uneasy with having been inadvertently shot at, the Cylons are itching to FTL jump away from the fleet, but Roslin convinces them to hang in there, and they instead park themselves in the middle of the fleet, counting on Gaeta not to endanger civilian ships. Leoben then helps Roslin broadcast another anti-mutiny plea to the fleet, which serves to magnify the doubts everybody is already suffering from to begin with.

Starbuck and Apollo help Tigh and the other skin jobs escape from the brig, but in the process, Sam gets shot pretty bad. Romo Lampkin, who was recruited to defend Adama in the sham of a trial that Gaeta and Zarek arranged for him, finally shows his true colors — not only impressing on Adama the importance of stalling for time while those loyal to him squash the mutiny, but also helping Starbuck save Sam’s life.

Person by person, the mutiny begins to fall apart, and in a desperate gambit to keep it alive, Tom Zarek resorts to having The Quorum shot, lying to Adama about Tigh being killed, and lying to Roslin about Adama being killed. This last act turns out to be a huge miscalculation on his part, however, as Roslin becomes enraged and vengeful, convincing the Cylons to fire on Galactica.

Gaeta, realizing that he has lost this particular game of Chicken, decides to cut and run while he still has a chance. He orders Galactica and the portion of the fleet that is still loyal to him to FTL jump to a set of coordinates before the Cylons have a chance to fire on them. But what he doesn’t realize is that Chief Tyrol has been crawling through Jefferies tubes (or whatever they’re called in BSG) all episode, and after overcoming a few obstacles, manages to reach the FTL drive just in time to sabotage it.

With no means of escape, Gaeta finally surrenders. Roslin and Baltar return to Galactica. And Gaeta and Baltar have some coffee and cigarettes, and a final, very serene conversation about who he could have been, if only he’d made different choices — an architect, a doctor, a photographer. His final words to Baltar — “I just hope that people realize eventually who I am.” — almost have me worried that he’ll turn out to be something more than he seems, but I’m hoping not. Because it’s a very touching scene, and really leaves you feeling that Gaeta got exactly as much story as he needed to out of this series.

After this, Gaeta and Zarek receive the only justice that will ever send a strong enough message to anybody who might consider following their example in the future — execution by firing squad. But both men seem resigned to their fates right to the end, clearly comfortable and unrepentant about the decisions they’ve made, and Gaeta even seems to have found some kind of peace. Because for the first time all season, his leg stump finally stops itching, a moment before death takes him.

Meanwhile, down where the FTL drive is, Tyrol seems very disturbed by what looks to be some major stress fractures in the hull of Galactica. Which I’m thinking doesn’t bode well …