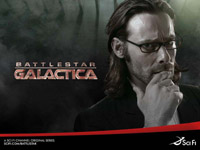 “The pain is how I learn from the guilt. There’s wisdom there. Clarity. You know yourself there…. When you’re in pain, that’s when you learn who you really are. That’s when you focus. Sharp as the point of a knife.” – Six to Tigh

So … it’s safe to say that pain was the common thread this week on Battlestar Galactica. In particular, the pain of guilt. Which Six schools Tigh about when he keeps visiting her cell, trying to learn how he can shut off the guilty pain he feels over killing his wife Ellen for being a Cylon collaborator (without revealing that he’s a Cylon himself). Six is oddly sympathetic to his plight, and in Tigh’s mind, she keeps morphing into the face of his dead wife. In fact, she’s so sympathetic that she gleefully bashes his face in for his own good, and he lets her. But really, it’s just foreplay, and the last we see of them, they’re making out on the floor. Not sure how that’s all going to end up, but as relationships go, it may just be THE most dysfunctional one on the show so far.

Elsewhere, Tyrol nurses the pain of Callie’s death — which everyone but Tory seems to have written off as a suicide — and it transforms him into a bit of a bastard. The episode begins with him eulogizing her, but it doesn’t take him long to find his own “focus”. Adama sits down with him at the bar after an incident with one of the ships, presumably to gauge Tyrol’s state of mind, and within moments, Tyrol is foaming at the mouth describing Callie as a “shriek” and telling the entire bar how he only settled for her after he learned that Boomer was a Cylon. Which … you know … DUH! We all pretty much knew that. But I guess he’s only now piecing it together for himself, and realizing that his own ironic bigotry prevented him from being truly happy. The scene ends with Adama kicking Tyrol off his ship, and one suspects that this is exactly what Tyrol wanted to happen all along — otherwise, he’d constantly be worrying if every “mistake” he made was really a subconscious act of terrorism.

No Cylon Base Star drama this week. Instead, Baltar is back, and Gaius Christ, what a strange plot line for him! How bizarre was that scene where Six held him up and pushed him forward? I replayed it over and over, trying to figure out if the actor was actually supporting his own weight. Because if Baltar has reached a level of delusion where he’s physically manipulating himself like this, then he’s truly gone right over the edge now, hasn’t he? As if the crazy-eyed “God loves us all because we’re perfect” speech didn’t pretty much confirm this. In keeping with the pain theme this episode, he embraces his savior-ness, abandons the cowardice he displayed earlier in the episode — when the Sons of Ares came calling — and allows himself (with some urging from the Six in his head) to get the snot beat out of him by a soldier in an act of civil disobedience. Which “sharpens” him into a hero.

Meanwhile, the Quorum — increasingly driven by young upstart Lee — has decided that Roslin’s fear of Baltar’s potential influence is unfounded. But in those final scenes where Gaius Christ is proselytizing to the masses, we see that she may be right. Although Baltar has of course played the role of a frak-up at times, everybody knows that when he finds his focus, he becomes dangerous. And the pain has indeed focused him. He’s now a symbol of the religious war brewing in the fleet, the One New God versus the Twelve Old Gods. Which of course mirrors the Cylon/Human war. Which of course parallels the civil war happening within the Cylon ranks. Bottom line, one gets the impression that we’re building toward a showdown here of epic proportions. And Earth will either end up being the prize or the very thing that brings everybody back together again.

As for the title of the episode, my take is that it’s a metaphor for what Six is saying. Pain and guilt send you into a nosedive. But if you ride it out, you reach a point where the dive stops, you find clarity, attain escape velocity, and pull back up again. Baltar has clearly done this. But Tigh and Tyrol are still working on it.