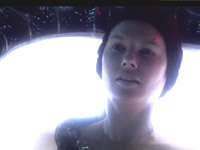 I saw an odd parallel between the two major plot lines in this week’s episode of Battlestar Galactica. The title is “Faith,” but I almost feel like it should have been “The Crossing.” Allow me to explain …

Roslin hears a fellow cancer patient (Nana Visitor of Deep Space Nine) recount a dream about crossing “The River” into the land of the dead. It’s all very Charon & the River Styx. Anyway, this metaphorical dream seems to be the result of listening to one too many Gaius Christ sermons … and it’s apparently contagious. By the end of the episode, Roslin herself is having the same dream, and the implication is that she’s starting to buy into Baltar’s “One God” brand of spirituality. And after she talks to Adama, we get the impression he might be too.

Meanwhile, over on the Demetrius, Starbuck narrowly averts a mutiny, but only after Anders shoots Gaeta in the leg. This buys Starbuck the time needed to talk Helo into letting her take a Raptor (and his girlfriend) to Leobon’s jump coordinates. Helo gives Starbuck 15 hours. She, Anders, Leobon, Athena, and some Red Shirt all make the leap, and sure enough, arrive at the site of the Cylon massacre. What’s more, Starbuck sees the Basestar, shooting around a planet like a comet … which is exactly what she has spent weeks painting on the wall of her cabin.

On the Basestar, Athena’s fellow Eights express to her that they’ve lost faith in the Sixes, and she scolds them about picking a side and sticking with it. One of the blonde Sixes remembers that the Red Shirt killed her in a past life, and returns the favor. Things get tense, and one of the less-blonde Sixes takes control of the situation, killing (after kissing) the blonde Six herself before things can escalate further. And Starbuck meets The Hybrid, who slowly and randomly dispenses the following bits of wisdom …

“The children of the one reborn shall find their own country.” (Who is this? Starbuck?)

“You are a spark of God’s fire.” (Similar to what Leobon said last week.)

“Thus will it come to pass, a dying leader will know the truth of the opera house.” (Clearly Roslin.)

“You are the harbinger of Death, Kara Thrace. You will lead them all to their end.” (This is what the hybrid in Razor also told Starbuck.)

“The missing three will give you the five, who have come from the home of the thirteenth.” This is of course the key bit of wisdom, and the writers don’t leave to us to interpret. D’Anna (Number Three) needs to be unboxed, so she can reveal who the Final Five are, because they’ll know where to find the Thirteenth Tribe (Earth). What’s interesting about this is that I’m pretty sure we’ve never had it confirmed or even suggested that the Final Five came from Earth. Although it’s certainly consistent with them knowing the words to “All Along the Watchtower”.

Okay, so back to my original point. Roslin is previewing through dreams the journey “across the river” from life to death, where her friends and family await her on the other side, and this is a spiritual act for her. Starbuck is likewise trusting Leobon’s spiritual entreaties to make a jump across the galaxy to a point in space that she has previewed in her paintings. Once there, she meets the “left for dead” Cylons and brings them back with her. And her reason for doing this is that several months before, she somehow jumped all the way to Earth and returned, and she’s been using some subconscious knowledge of where the prophesied Promised Land of Earth is to try and lead the fleet there

So there’s all this jumping and crossing going on, and it’s all very spiritual, and it all involves death and the nearly dead and the living trying to avoid being dead, and the solution is always somewhere “over there,” somewhere that can’t be seen from here, somewhere we have to trust is there or we’ll never try to find it. In other words, leaps of FAITH. So maybe the episode is aptly titled after all.