Too … much … information … can’t … process.  Seriously, just one revelation after another in this week’s episode of Battlestar Galactica.  Join me, won’t you, while I dump out everything I can remember, and make as much sense of it as as my puny human brain can manage … 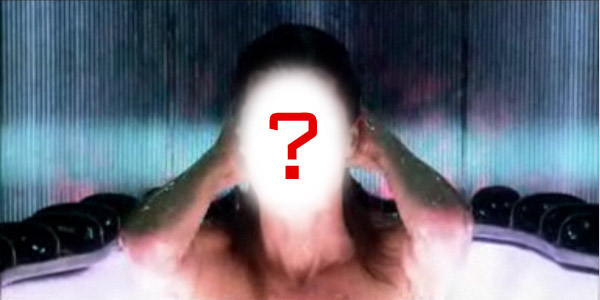 So after getting shot in the head last week, the bullet lodged in Sam’s brain causes him to remember everything about his and the rest of The Fives’ life on Earth, and he regales them– and Starbuck — with this information in frantic bursts right up till the point when Doc Cottel insists that the bullet be removed.  At the same time, we rewind back 18 months, and see Ellen resurrect after drinking Saul’s poison cocktail on New Caprica, then fast forward through her life on Cavil’s base ship until we reach the present day.  As a result, we get a TON of new information about the Cylons, both old and new, which I’ll try to put into some kind of chronological order …

1) The Five are born on Earth, grow up, and all work for some kind of research facility.  Together, they rediscover the resurrection technology that was somehow lost to them in the years since the Thirteenth Colony arrived from Kobol, and they install it on a ship in orbit of the planet.

2) When Earth gets blown up by angry Centurions, the five of them resurrect on the ship, then travel at subluminal speed back to Kobol — since they don’t have FTL technology yet.  They pass through the “Temple of Five” on the Algae Planet along the way, and tweak it so that it will one day show their faces to D’Anna (or presumably to whichever Cylon first found it).  The trip takes about 2000 years.

3) The Five’s plan is to warn the twelve colonies of the dangers of mistreating the Cylons they create.  But by the time they get there, the First War between the humans and Cylons is already in high gear.  They broker peace by promising the Centurions the technology both for creating biological bodies and for resurrection.  The Centurions agree, and the war ends.  The Centurions introduce The Five to the concept of One True God.

4) Cavil/John (#1) is the first skinjob they create, and he helps create seven others — Leobon (#2), D’Anna (#3), Simon (#4), Doral (#5), Six (#6), Daniel (#7), and Sharon (#8).  Daniel is an artist and is favored by Ellen, and Cavil/John is so jealous of him that he screws with Daniel’s cloning process, effectively killing off that line.  (I just want to go on record as saying that I knew something was fishy about #7.  Refer to this blog entry, where I compulsively rattle through all the numbers, and realize #7 was conspicuously missing.  I don’t say this to brag — only to point out to those who might be thinking that the writers are making shit up as they go that this Daniel character was obviously planned all along.)

5) Cavil/John decides he doesn’t like his creators, and kills The Five, screwing with their cloning process too, so that they won’t remember who they are, and scatters them across the colonies to live out human lives.  He does this presumably as a kind of revenge/punishment for making him live in a crappy human body, instead of a cool metal one with enhanced senses and abilities.

6) The seven new Cylons declare war on the colonies, which brings us to where the mini-series started.  It’s unclear whether Cavil/John expected The Five to die in the attack on the colonies, or if — as Ellen seems to think — he wanted them to live long enough to return to Earth, remember who they were, and finally give Cavil/John the respect he feels he deserves.  Regardless, they live, and remember what they are when they get close enough to Earth.  But Ellen has “died” on New Caprica by this point, and has resurrected on Cavil/John’s base ship. 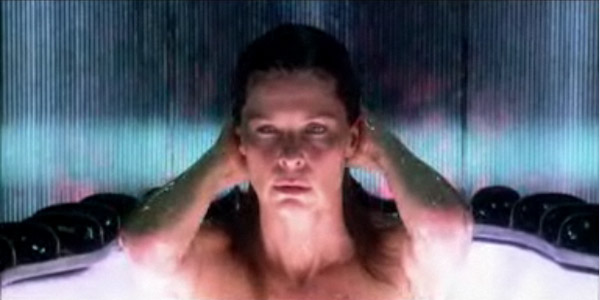 7) Of The Five, only Ellen remembers Earth and everything that happened before Cavil/John killed them.  When the resurrection ship is destroyed, Cavil/John insists that she tell them how to rebuild it.  She claims that she needs the rest of The Five to do it, but Cavil/John doesn’t believe her, and is going to extract the information from her brain surgically.  But before he can, Boomer flies her off the base ship and FTL’s her away, presumably to join up with the human fleet, where Sam has just revealed some of The Five’s history to Saul, Tyrol, Tory, and Starbuck, including the fact that Ellen is one of them … and where Tyrol is planning to use Cylon bio-tech to keep the Galactica from falling apart, with Adama’s drunken blessing.

And there you have it.  As for who Daniel might be … it’s anybody’s guess.  Have we ever met a character named Daniel?  Although really, there’s no guarantee that if he’s alive, he even calls himself Daniel any more.  Look how many names Six has had — Gina, Shelley, Natalie.  So really, he could be anybody.

Did I forget any important details?  If so, then sound off in the comments!