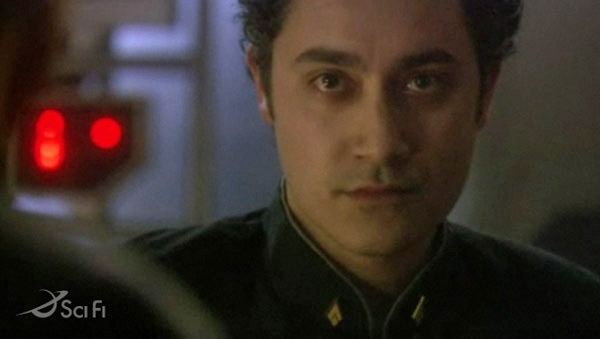 As we hit the third of the final ten episodes, the writers clearly understand the need for expediency, and have wasted no time at all moving last week’s “disquiet” into a full-out mutiny, led by none other than Che Gaeta himself. Who on the one hand seems to believe that he’s doing the right thing for the Human fleet, but on the other, seems awfully willing — with Tom Zarek’s prodding — to play fast and loose with the lives of crew members in order to achieve his goals.

After recruiting a sizable chunk of Cylon-hating marines and pilots to his cause and setting various pieces in place, Gaeta is able to leverage his role as Galactica’s tactical officer to orchestrate an aggressive chain of events. Tom Zarek is freed from custody and returned to the Quorum on Colonial One, while Lee Adama is tricked into returning to the Galactica. Assorted Cylons are thrown into the brig. Reports of a fictional fire and faulty sensor equipment create a distraction that masks the culling of weapons. By the time soldiers loyal to Gaeta appear on the bridge and level their guns at Adama and Tigh, it’s pretty much too late to stop him from taking over the ship.

Fortunately for those still loyal to Adama and Roslin, Lee and Starbuck are able to evade capture and get to the president before the rebels do. They bring her to Baltar, who allows her to use his covert evangelical radio frequency to broadcast an appeal to the fleet to not give into fear and violence. It’s nice to see that Roslin finally gives a shit again, but one supposes she HAS to realize that Gaeta’s rebellion probably could have been nipped in the bud if only she hadn’t dropped the ball in the first place.

Anyway, with Tyrol’s help, Roslin and Baltar manage to get off the ship in a shuttle, while an escaped Adama and Tigh cover their backs. And just before we see the words “To Be Continued”, Gaeta gives the order to destroy the shuttle, while soldiers lob a grenade into the enclosed room where Adama and Tigh have made their final stand. Things look bleak, but I’m sure it will all work out. After all, conspicuously absent this past two episodes have been the Rebel Cylons, who I’m sure have been monitoring all the intra-ship radio chatter and will intercede in one way or another.

Mark Verheiden wrote this episode, and it really showed. His tense, intimate conversations between key characters — Baltar and Roslin, Baltar and Gaeta, Lee and Starbuck, Lee and Zarek, Adama and Gaeta, Adama and Tigh — are all pitch perfect and speak volumes in very few words. Starbuck to Lee: “Take a breath, Lee. Feels good being alive, doesn’t it?” (How nice to see her kicking ass again, by the way, instead of whining.) Adama to Gaeta’s rebels: “I want you all to understand. If you do this, there will be no forgiveness. No amnesty.” Roslin to Baltar: “If it makes you happy, maybe we’re both frauds, and this is our last chance to atone.” Tyrol to Lee: “Old Man deserves a better fate than what he’ll get from them.” And Adama, to his Cylon best friend, about whom he’s been agonizing since the tail end of last season: “It’s been an honor to have served with you, my friend.” It’s like all of the characters have woken up out of a fugue and rediscovered their true natures. Which I found very refreshing.