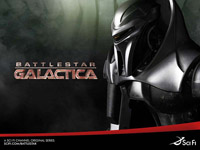 Lee has embraced his role as junior member of the Quorum, casting his lot — for better or worse — with VP Tom Zarek, exposing some of the more dictatorial aspects of Roslin’s regime. Of course, Zarek tends to have his own nefarious agenda, and it remains to be seen if Lee is playing right into his hands.

Starbuck leads a small crew that includes Anders, Helo, Sharon, Gaeta, and a few others on a garbage scowl searching for Earth. After several weeks of changing course and doubling back, everybody seems ready to mutiny. Except Anders, who chooses instead to punish Starbuck by having angry sex with her.

No Baltar this week. But apparently, his semen has the power to make people evil. Because after Callie learns too much about her Cylon hubby and the other Semi-Final Four, Tory takes on the responsibility of flushing her out the airlock, coldly and efficiently, as if it’s just one more item on her administrative to-do list. Which is ironic, since it’s usually the Cylons who get the airlock treatment.

By the way, did any hardcore geeks out there catch the number on the weapon’s locker that the Semi-Final Four met in — “1701D”?

Now … who’s pissed and who’s happy that Callie is dead? And what do you think her plan was before Tory found her? Was she going to kill herself and the baby? Or just the baby, because she knew it was half-Cylon?

Meanwhile, the Cylon Civil War rages on. At first, it looks as if there might be a truce. A regenerated Brother Cavil (who is apparently getting it on with Boomer) agrees to stop lobotomizing the Raiders, and agrees to un-box the D’Anna line. But it’s all too good to be true. He leads the Six and Sharon base stars to a point in space beyond the reach of the Resurrection Ship, then attacks them with full force, leading to one of the most brilliant exchanges between two Cylons ever written for this show …

Cavil: “Just remember. They started it.”

Cavil: “They can trust their God to watch over their immortal souls.”

Boomer: “And what about ours?”