This week, on the premiere of Joss Whedon’s new show, Dollhouse … 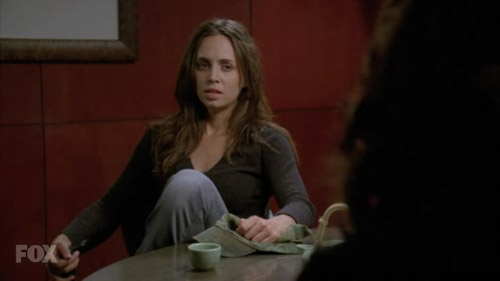 So what did everybody think?  I probably won’t be the first to say, “I liked it, but I didn’t love it.”  After only one hour, it seems like there’s still more promise than payoff.  But when I think back to the first episodes of Buffy, Angel, and Firefly,  the same applied there too.  Like a batch of chili, I’ve found that slow cooking over time is a key aspect of Joss Whedon’s brand of storytelling.  It might taste okay if you eat it when it’s only been cooking for an hour, but the real payoff is eating it a few days later.  So I look forward to seeing how the show will feel after a few more episodes, and then again after the “front 13”  are complete. 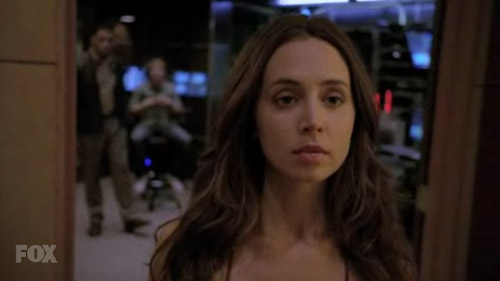 So you’ve probably heard the premise already:  a mysterious agency, “The Dollhouse” for lack of a better name, takes hot young 20-somethings, wipes their minds, and loads them up with memories and abilities that enable them to carry out “assignments” that some rich person is paying for.  Over and over again.  Echo is one of these “Actives” or “Dolls”.

We don’t know much about Echo’s past.  Only that she used to be Caroline, and that at some point, she created a “mess” while “trying to make a difference … trying to take [her] place in the world, like ‘she’ always said.”  But “actions have consequences.”  The Dollhouse has offered her a clean slate.  They’ll clean up whatever mess it is she made, and after five years, she’ll get her life back.  Caroline accepts, and becomes Echo.

As Echo, she basically walks around The Dollhouse in a clueless daze — part naive child, part lobotomized mental patient.  Not unintelligent, but also not quite connected to whatever intelligence she might have.  One assumes that her real personality is in a database somewhere, ready to be uploaded again when her five years are up … although it seems to be bleeding through now and then already.  At one point, she stumbles across the room where new Dolls are “created” — because, you know, they wouldn’t bother to lock that door or anything — and we see that the process looks fairly painful and inhumane.  But I guess it doesn’t matter if you don’t remember it ever happening? 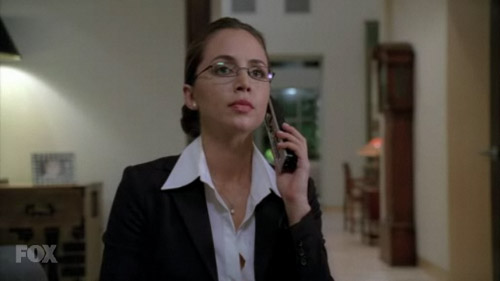 Echo’s main assignment this episode is acting (literally) as a private negotiator in a kidnapping situation.  So she’s programmed with the skills and memories of an actual negotiator.  What makes things a bit more interesting is that when you’re a Doll, you get the bad along with the good, because as it’s explained, strengths are often just the result of compensating for some weakness.  In Echo’s case, this means that during the kidnapping assignment, she’s not only near-sighted and asthmatic, but also has the memories of her uploaded personality, including the memory of having been kidnapped as a young girl — a girl who went on to commit suicide later in life.

Things get all the more complicated when it turns out that one of kidnappers who are part of Echo’s assignment is the guy who kidnapped the girl in her head.  This was actually a surprise aspect of the premise for me that I found pretty cool.  Because in the end, when the kidnapper is taken down, Echo is essentially able to get justice for the girl while being the girl.  It’s only posthumously and by proxy, of course, but still — there’s a certain poetry to it.  And this opens up all kind of possibilities for future episodes.  For instance, what if Echo actually meets one of the people who is in her head while they’re in her head?

Rounding out the intrigue is the fact that this Dollhouse agency is quite illegal, and that Agent Paul Ballard (played by BSG‘s Tahmoh Penikett) is hell bent on finding enough evidence of it to take it down.  No seriously, he’s really really hell bent.  To the point where you have to wonder why.  Was somebody he loved recruited as a Doll and made to forget about him?  Or was he burnt by a Doll at some point?  It seems unlikely that he’d be this angry just out of pure principle.  Unfortunately for him, he’s kind of a Mulder in this scenario — he doesn’t get much support in his search for the Dollhouse, but they keep him on the case anyway.

Within the Dollhouse are a cast of characters we don’t know too well yet — the cold lady who seems to run things, the goofy science guy who performs the wipings and uploadings, the creepy physician played by Amy Acker, the hard-ass security chief (played by the brother from Journeyman), and Echo’s handler, who seems to have some moral misgivings about what it is the agency does, and who I’m guessing will bang heads with the cold lady and the security chief every week.  Not to mention a variety of other Dolls, only one of which we’ve met so far — Sierra, who Echo saw being “created”.

The episode ends with a creepy scene in which somebody, after having killed some people, is watching a videotape of Echo as Caroline in college.  Who this might be, and what his/her interest in Echo is are unknown yet.  But I’m guessing he doesn’t want to give her a hug.

So what did you think?