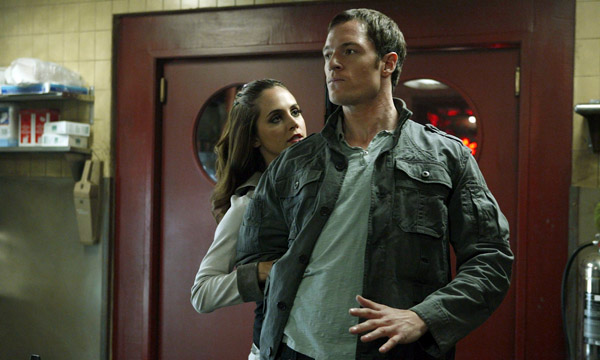 So this was it.  The episode of Dollhouse that Joss Whedon told us would change the game, by putting the series into a broader context.  And I have to say … it succeeded for me.  I still don’t think the show is perfect, but I thought this episode went a long way toward at least putting it on the right path.  Or on any path at all, for that matter.  Previous episodes have seemed largely episodic, but this one felt strongly like part of a larger mythology on the back of which a multi-season series could be built, and it has me excited to see where things will go from here.

In fact, I’m even going to make a point of learning all the characters’ names from here on out, and using them in my recaps.  (But I’ll add adjectives, for those who aren’t clear on who’s who yet.)

Two very compelling storylines competed for attention this week — one of which took place inside the Dollhouse, and the other outside the Dollhouse — but then came together at the end in a very well-crafted way that last week’s “Boner Patrol” episode did not.  In fact, the lack of integration of the inside-outside stories in previous episodes may very well be part of what’s made them less satisfying for me.  So I hope to see more integration like this in the future.

One storyline involves Sierra, who it turns out has been having sex with somebody.  And not the “good” kind of sex, which involves money changing hands, but the bad kind, after hours, in the Dollhouse itself.  Because of the Boner Incident, Victor is of course the prime suspect.  But after some good old detective work on Handler Boyd’s part, it’s discovered that Sierra’s handler, Hearn, has actually been using his programmed influence over Sierra to — let’s not mince words — rape her.  And vile as this idea is, I thought it was a great way for Whedon to finally make the point that yes, he understands how sleazy the Dollhouse technology is and can be, especially in the wrong hands.

The other storyline involves Agent Ballard’s ongoing quest to find the Dollhouse in general and Echo in particular.  He catches a break when he find a financial trail of breadcrumbs that leads him to Joel Mynor, a dot-com millionaire who apparently uses the Dollhouse every year at the same time.  As it turns out, Mynor’s wife Rebecca died on the same day that he was going to show her that he’d “made good” and now each year, he hires an Active to pretend to be her, so that he can act out the day he wished he’d had with her.  But Ballard knows none of this when he bursts in on Mynor and his “wife” and is surprised to find that the Active is Echo herself.  He hesitates to act, and in that time, Mynor’s security detail rushes at him, while Handler Boyd rushes in to spirit Echo away.  In the end, Ballard is left with only Mynor himself, who tells his story, and aptly points out that Ballard is probably more pathetic than he is.

Back at home, Ballard has been confiding the details of his investigation to Neighbor Mellie, who seems more than eager to talk to him about it, although like Mynor, she suspects that Ballard’s interest in the case might have less to do with the Dollhouse and more to do with Echo herself.  Regardless, Mellie can’t resist her massive crush on Ballard, and long story short, the two end up having sex.  What’s especially nice about these scenes is that it’s the first time I’ve thought of Mellie as anything but a passive, moon-eyed girl.  Yes, she caves into his romantic advances — but it’s clear that she’s not as passive as she seems, and to be honest, she and Ballard actually make a convincingly good couple.

Anyway, so after they have sex, Ballard runs around the corner for some post-coital Asian food, and at the restaurant, unexpectedly has his “second date” with Echo.  In fact, it turns out that Boss Woman Dewitt has been monitoring Mellie’s apartment, knew he would be here, and had Geek Topher program Echo with the skills required to (presumably) kill Ballard for getting too close to the truth.  The kick-ass fight sequence that ensues between Echo and Ballard is pleasingly brutal, and reminded me a bit of the kitchen fight scene between Brad Pitt and Angelina Jolie in Mr. & Mrs. Smith.  Like that one, this fight starts in the kitchen, then makes its way into the back alley, and ultimately ends when Echo drops a bomb on Ballard.  But not literally.  More like an information bomb.

Earlier in the episode, when Topher was programming Echo for this particularly outing, he walked away for about 5 minutes to have a conversation with Boyd about Sierra.  Apparently, during that time — or so I’ve deduced — somebody in the Dollhouse monkeyed around with Echo’s programming.  (My best guess would be his assistant Ivy.)  As a result, Echo speaks to him from the point of view of some anti-Dollhouse organization, and tells him:  1) that there are more than 20 dollhouses across the world, wired into all levels of government; 2) that “fantasy is their business, but it’s not their purpose” — in other words, the dollhouses have a bigger agenda than just acting as a high-class prostitution ring; and 3) that the Dollhouse will go to great lengths to protect this information.  At which point, Echo shoots a cop with Ballard’s gun, effectively framing him.

Meanwhile, Dewitt has been faced with the dilemma of how best to punish Hearn for raping Sierra.  She decides to use his desperation to their favor, and sends him out to kill Mellie for knowing too much about Ballard’s investigation.  Hearn arrives at her apartment and is in the process of killing her when a phone call comes through, and goes to the answering machine.  You think it’s going to be Ballard, but it’s actually Dewitt.  She speaks a triggering phrase, something to do with flowers, and Mellie the Fawning Neighbor suddenly becomes Mellie the Ass-Kicking Sleeper Active.  She dispatches Hearn quickly, killing him in what can only be considered poetic justice, then Dewitt speaks an untriggering phrase, and she is meek Mellie again, waiting for Ballard to come to her rescue.

Mellie being a doll wasn’t entirely unexpected, but I have to say, the reveal was very clever.  And it really made me wonder about the complexity of Dewitt’s motivations for the first time.

Anyway, so for killing the cop, Ballard gets booted from the FBI, and we get the impression this is exactly what the anti-Dollhouse organization wanted, possibly because it unfetters him from the law, and puts him in a better position to help them uncover and take down the Dollhouse organization.

And there you have that.  Interspersed throughout the episode are “man on the street” interviews with various people who have something to say about the Dollhouse as an urban legend.  The last of these is with a professor who very sternly expresses his point of view that if the Dollhouse technology truly existed, it would pretty much make human existence meaningless (or something like that), because if you couldn’t ever be sure if you were real or a Doll programmed to think you were real, then what would be the point?

All in all, I enjoyed the episode enough to watch it twice.  What did you think?

2 thoughts on “Dollhouse: Man on the Street”