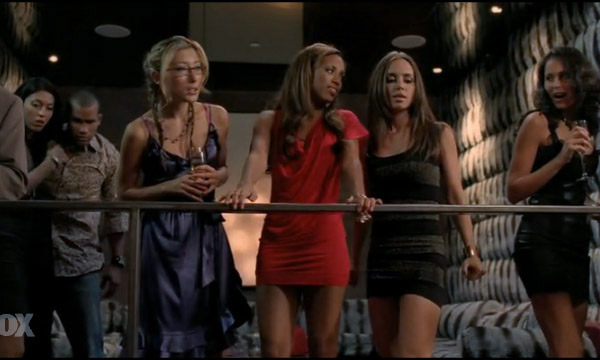 As with last week, the momentum on this show is continuing to build for me.  Each episode, we seem to get another few pieces of the puzzle thrown on the table.  Echo’s assignment this week is to be a backup singer/bodyguard for a pop diva whose Number One Fan is trying to kill her, but it ends up being a bit more complicated than that, with some twists added by the time it’s all resolved.

We learn from resident genius Topher that Actives are programmed with both a “persona” and a “parameter”.  For Echo this week, her persona is a struggling singer who just got her first break.  But her parameter is that she must protect the diva she’s now working for, which she’ll do instinctively and unconsciously at all times.  Which means she doesn’t even realize she’s a bodyguard, but will act as one anyway.  But what Topher doesn’t realize is that in Echo’s case, she is actually Persona + Parameter + ECHO.  Which comes into play when, during the process of protecting the diva, Echo starts working “off task,” outside the box, figuring out that the greatest threat to the diva’s life is her own death wish, and orchestrating a situation in which — while neutralizing the Super Fan — she also brings the diva to the brink of death and saves her, effectively curing the diva of her death wish.

Joining Echo on this assignment is fellow active Sierra, who plays the part of one of the diva’s many adoring fans, and who basically seems programmed to play the role of the victim this time around — a far cry from the bad-ass role she played at the end of the first episode.  In her case, I guess persona and parameter were pretty much the same thing.  When the mission is over, and both actives are back at the Dollhouse, Sierra seems happy to see Echo, and Echo discourages it with a simple shake of the head that Sierra immediately understands.  Which means the actives are keeping secrets from their “makers”.  Not sure why … but I’m sure the agency won’t be happy about it if/when they figure it out.

Meanwhile, Agent Ballard’s search for the Dollhouse grows more complicated when Victor, his unwilling Russian mob informant — who continues to insist that the Dollhouse is a myth — sends him into an ambush.  Ballard survives it, but ends up with a bullet in his gut, in the hospital.  But the more interesting thing about all this, is that it turns out Victor … is an active.  So the agency was using him to keep tabs on Ballard, and no doubt to throw him off course.  What remains to be seen is if the agency intended to send Ballard into that ambush to die, or if this was something Victor did on his own initiative.

For those paying attention, the episode was co-written by Maurissa Tancharoen and Jed Whedon.  And yes, that is Joss’s brother.  The two are a couple, and also co-wrote (with Joss) a little project you may have watched this summer, called “Dr. Horrible’s Sing-Along Blog”.  If so, then you’ve seen them — Jed was one of the Bad Horse chorus and also Dead Bowie, and Maurissa was Captain Hammer’s Asian groupie.  The two are composers/music folk by trade, which explains why Joss brought them on for this particular episode.  And while we’re on behind-the-scenes topics, I have to figure this kind of episode — in which she gets to be singer/dancer for one week — was exactly why Eliza Dushku prompted Joss to create the concept for the series in the first place.  For her, it’s an ongoing “reel” builder.