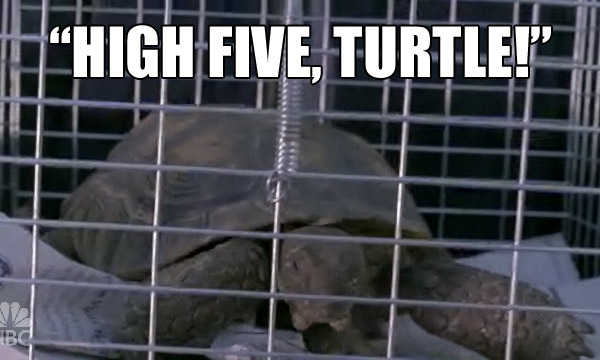 Daphne seems to have somehow become the heart of the show at this point, working for the bad guys when she clearly isn’t bad, for reasons that aren’t apparent, yet fated to be tied to Matt, who — along with his pet turtle (tortoise?) — is determined to save her, both from Pinehearst and herself, and I really hope the writers give us a pay-off for this internal struggle she’s been going through all season, watching things happen around her that she doesn’t approve of, always knowing she can just run away if things get too rough.

In one of the first truly clever uses of his powers, we learn that Hiro didn’t actually kill Ando, but did a combination of time-stopping, time-jumping, and teleporting to make it look that way, so that the Pinehearst recruiters (Knox and Daphne) would take him seriously, and they do, and give him the assignment of capturing the African precog, Usutu, who uses his ability to elude Hiro through a series of well-timed shovel beatings, then shows Hiro who the real villains are in a painting that seems to depict Knox, Flint, possibly Arthur Petrelli (looking kind of Two-Face-ish), and ??? (maybe Nathan with facial hair). 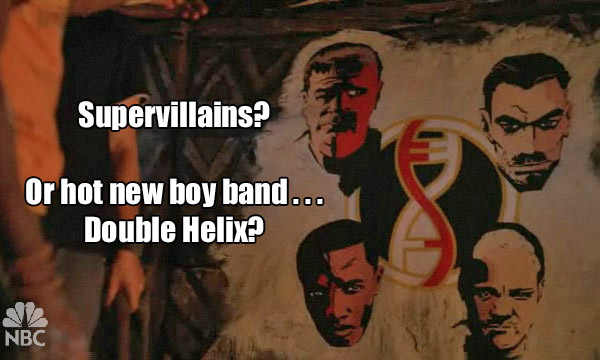 Speaking of Pinehearst, we finally learn what Papa Petrelli’s superpower is when Knox drags Adam into his hospice room and Arthur proceeds to suck away his healing power, which in turn results in Adam’s age catching up to him all at once (BYE BYE ADAM!!!) and Arthur immediately healing himself. 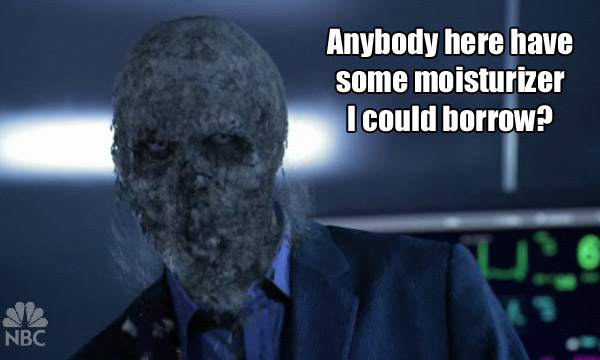 Nathan and Tracy-Not-Niki pay a visit to Moo-Ha-Ha-Hinder, who drugs them and straps them down, Tracy freezes his arm, they temporarily escape, Nathan is useless, Mohinder throws a table at them, and Maya puts in her best acting job of the season as a face sticking out of the webbing on the wall.

Among her “errands,” Daphne releases Sylar from Level 5, who in turn releases Peter, who in turn reads his comatose mother’s mind, finds about about Pinehearst, kicks Sylar’s ass, then teleports to Pinehearst, where his father welcomes him with open arms — open, power-stealing arms — which I’m thinking might just explain how Future Peter ended up with that scar! 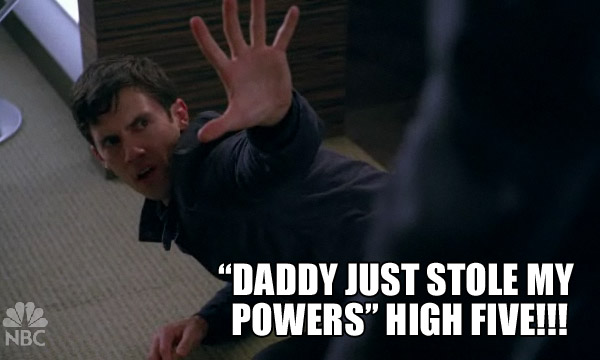 And last, and most certainly least, Claire and her Fake Mom set out to rescue her Real Mom from the Puppet Master, and Claire’s all, “Shoot me!” and her Fake Mom does, and Not-Dead Claire knocks the guy out and … really, that’s all that happened … I can’t even think of a way to make that story funny, because it was kind of useless compared to everything else that happened in the episode. They’ve managed to drag out Claire’s coming of age story WAY too long at this point. We get it, she’s an adult now, she’s not her daddy’s little girl any more, she wants to fight bad guys … blah blah blah. Put her in the action already.

The Claire sub-plot aside, though, I really liked the energy of this episode, and feel as if starting with last week, the show has picked up some steam now that the villains have been identified and people are starting to choose sides.

For those of you who don’t already know, here’s the Dylan Thomas poem that the title comes from. If you look closely, you’ll see some themes and imagery from the episode …

Do not go gentle into that good night,
Old age should burn and rave at close of day;
Rage, rage against the dying of the light.

Though wise men at their end know dark is right,
Because their words had forked no lightning they
Do not go gentle into that good night.

Good men, the last wave by, crying how bright
Their frail deeds might have danced in a green bay,
Rage, rage against the dying of the light.

Wild men who caught and sang the sun in flight,
And learn, too late, they grieved it on its way,
Do not go gentle into that good night.

Grave men, near death, who see with blinding sight
Blind eyes could blaze like meteors and be gay,
Rage, rage against the dying of the light.

And you, my father, there on the sad height,
Curse, bless, me now with your fierce tears, I pray.
Do not go gentle into that good night.
Rage, rage against the dying of the light.

1 thought on “Heroes: Dying of the Light”