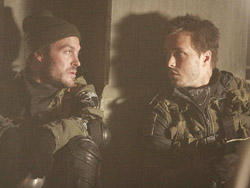 This week’s episode of The Sarah Connor Chronicles picks up where the last left off. Charlie manages to save Derek Reese’s life, with the help of a blood transfusion from nephew John, while Sarah finally breaks down and gives Charlie the whole story, cyborgs and time machines and all. He takes it remarkably well, warns Sarah about the FBI agent (who we know is Cromartie) that’s on her trail, then exits gracefully. I’m sure it’s not the last we’ll see of him, though.

Meanwhile, at least half of the episode is flashback material buzzing through Derek Reese’s unconscious brain. Of course, it’s only a flashback to him. To us, it’s a flash forward, because it’s all events that happen before Derek gets sent back in time. We get to see the show’s version of Kyle Reese (any old General Hospital fans out there recognize who it was?), ogling the show’s version of the photo of Sarah Connor that MADE him fall in love with her before he ever met her. And now, of course, we realize that John Connor likely gave Kyle that photo to make him fall in love with his mother, so that he could go back in time and bang her on the first date, thereby knocking her up with John. Which is kind of creepy. But hey, global destruction by robots makes a man do strange, unorthodox things.

We see the Reese brothers and a small society of other humans living in what is essentially a foxhole. When Derek and three others go out on patrol, they’re attacked and taken prisoner by cyborgs. While imprisoned, Derek meets an older version of Andy Goode, who confesses to being responsible for Skynet. Derek and his crew escape — although it’s unclear how — where did that ax come from? — and head back to the foxhole, only to find it has been cleared by the cyborgs. They meet up with some other humans, who take them to the new headquarters. Derek learns that his brother is still alive, and that John Connor sent him on a special mission. He demands to speak to John, who then decides to send him and his crew back in time to act as a supply station … which brings us up to date.

Oh, and when Derek said he didn’t kill Andy Goode? He lied. He totally did. But now we understand a little better why. Although I don’t think Sarah will be happy about it if/when she finds out. In-laws … always so much trouble!

And Cameron? She’s acting sneaky. First hiding that piece of Coltan, and now the hard drive from the terminator they took down. I’m hoping her intentions are good, though. Who knows, maybe she’s just planning to build herself a little cyborg puppy named T-Bone?