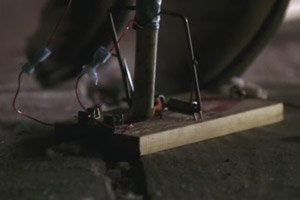 Okay, so the title of this week’s episode of The Sarah Connor Chronicles is “Mousetrap”. And about 15 minutes into the episode, you already understand why. And then a few minutes after that, Cromartie point blank gives you the history of the mousetrap, and how it can’t really be improved upon. Which is probably true. It’s not really possible to build a mousetrap that’s much better than the original. But, as Wile E. Coyote has proven time and time again, it is possible to build a more COMPLICATED mousetrap … which may or may not work.

And that’s kind of what this episode felt like. Wile E. Cromartie using assorted ACME parts to try and catch John “The Road Runner” Connor with an overcomplicated mousetrap. All in all, it was an okay enough episode, I guess. Told its story. Had a beginning, middle, and end. But I walked away from it kind of feeling like terminators aren’t really all that scary.

Cameron’s clearly still glitched as a result of the explosion, and is walking around the house worrying about home improvements and a bird trapped in the chimney instead of, you know, protecting John — which she’s doing a shit-poor job of. I’ll abide this for a while longer, because I’m guessing they have plans to bring that plot line to a head soon. But I want Cameron the bad ass back! 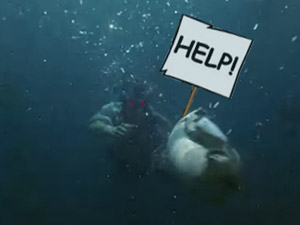 Meanwhile, Cromartie’s in the middle of the desert, busy setting up elaborate scenarios and rigging up MacGyver-worthy apparatuses (apparati?) out of mousetraps, molding clay, cell phones, and spare pieces of wire, all in an effort to determine where John is. Then when he finds him, it sets off a “chase” scene on the boardwalk that, if sped up, could easily have had some Benny Hill music playing behind it. And in the end, he’s defeated by the fact that he’s much heavier than water. And tell me that image of him and his red eyes sinking to the bottom of the ocean didn’t remind you even a little bit of the way Wile E. Coyote used to fall slowly to the bottom of a canyon? 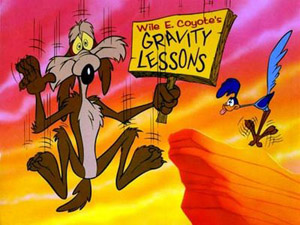 So with all of that bumbling, the T-1001 unit, Catherine Weaver, MUST be doing something cool and deadly, right? Um. Okay, not so much. She and Ellison sit and talk. And talk. And talk some more. She makes up some big fake story about her brother and her husband and some plane crash and blah blah blah. And FBI guy is clearly buying it all. And I’m guessing that he’ll hook her up with Cromartie at some point, and to be honest, without knowing what her big picture is, I don’t really care all that much about this plot line yet. Maybe when it comes together more.

And then there’s the matter of Penny, er, Michelle dying. I didn’t honestly care about the character all that much, but it still seemed like kind of a stupid way to die, particularly since she was the only one to get injured by the cell tower falling, and is conveniently miles away from the nearest hospital. And now the writers are open to explore the relationship between Charley and Sarah, which will of course be conflicted. Charley’s probably all hell-bent for revenge on the machines at this point, but he should be pissed at John, for dragging his ass into all this in the first place. John was the one who went looking for him, and John was the one who brought him to the house to save Derek’s life.

And I refuse to even discuss the dopey relationship between John and Riley. Seriously, man, you’re the savior of the human race. Start acting like it!