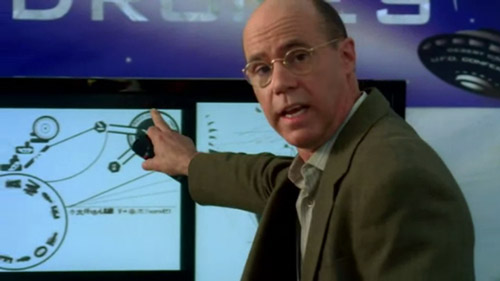 In the mid-season finale, the “Quest for the Three Dots” continues.  This time, Sarah’s search takes her to a UFO Convention, where she learns about something called “California Drones” — a kind of UFO with three dots on the hull — from a guy who I thought looked an awful lot like Ernie, the youngest son on “My Three Sons”.  As it turns out, the actor was in fact Ernie, a.k.a. Barry Livingston.  Anyway, Sarah follows this trail, and eventually connects with a woman named Eileen, who lives in a trailer and claims to know something about “Abraham”, the mysterious blogger who first revealed evidence of the drones, whose real name is Alan Park, who turns out to be Eileen in disguised as a woman.

Alan/Eileen was a scientist who specialized in a kind of light radar used by robots, and who used to work for an anonymous tech company in possession of some futuristic metal, but got scared by what she was discovering and went into hiding.  She offers to give Sarah a piece of the metal, but when they go to retrieve it, some guy on a motorcycle tries to kill them.  They escape, and using a hypnotherapist, Sarah is able — before the motorcycle guy kills both Eileen and the hypnotherapist — to get directions to the warehouse in the middle off the desert that Alan used to work at, goes there, and gets shot in the leg by the motorcycle guy, but manages to kill him.  (Her first human kill, I think?)  Then she crawls to the open door, and lying on the ground, looks up to see something that looks a bit like one of the flying Skynet machines we saw in the first scene of the first Terminator movie.  It hovers over Sarah … and the episode ends. 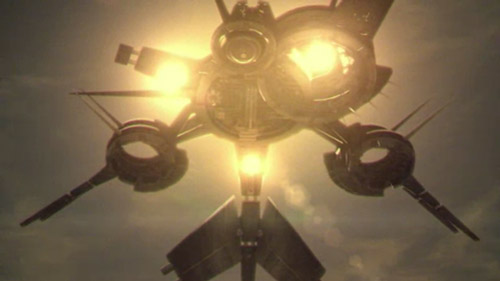 Was it real or Sarah’s imagination?  If it’s real, then is it from the future?  Or have Skynet elements in the present built it?  Or has the Air Force built it using the advanced metal and Skynet blueprints?  If so, what’s their motive?  Hard to say for now.  But it certainly raises the stakes a bit for the Connors.

Meanwhile, we get some flashbacks that conclusively show Jesse recruiting Riley in the future and bringing her back with her, with the goal of keeping John away from Cameron.  Riley is falling apart emotionally, however, and Jesse isn’t particularly sympathetic to her plight.  The last we see of Riley, John and Cameron find her on the bathroom floor, her wrists cut, clearly having just tried to commit suicide.  It’s not clear yet whether she’s dead, but I doubt it.  My guess is that her plot arc will end next year with her confessing to John who she is, Jesse probably killing her for it, and Derek in turn rejecting and/or killing Jesse as a result. 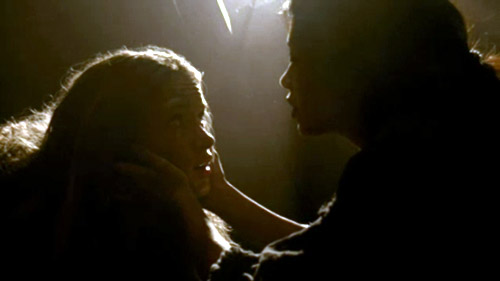 Which reminds me — Derek was conspicuously absent this episode.  Seems an odd choice to leave a major character like that out of any kind of finale, even just a mid-season one.

Oh, and after some soul-searching, Agent Ellison has decided to accept Catherine Weaver’s challenge to take on the task of teaching John Henry how to be more human.  Yeah, that should end well.  The A.I. was last heard asking Ellison, “Greetings, Professor Falken.  Would you like to play a nice game of chess?” 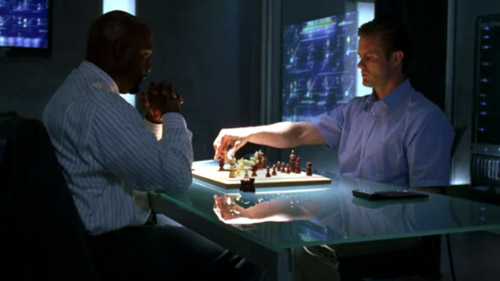 Anyway, so the show will be back in February, on Friday nights, alongside Joss Whedon’s new “Dollhouse” show.  I’ve really enjoyed the season so far, so you can bet I’ll be there.