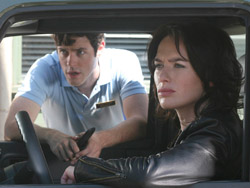 Okay, so if you watched this week’s episode of The Sarah Connor Chronicles, odds are you want to talk about those painted doors. Because seriously, what the hell was up with that? And I have some ideas. But first, let’s run through the rest of the episode …

Using photos left behind by the Future Freedom Fighters, Sarah gets a lead on somebody who may be responsible for the creation of Skynet — a former Cyberdyne intern (Andy) who now sells cellphones. She dates him for a few days, and learns that he’s created “The Turk” — a primitive AI that mostly just plays chess. When she learns from Andy that The Turk has moods — that its choices vary from day to day for no logical reason, she realizes this is perhaps the first sign of Skynet-like self-awareness, and decides to act. In the end, instead of killing Andy, she burns down his house, thereby destroying The Turk.

All the while, the future person with the Skynet bar code on their arm is stalking Andy as well. My suspicion is that this mysterious person is perhaps Miles Dyson … but I can’t quite figure out how that would be. My reason for thinking so is kind of meta. When they showed the photo of Miles with his family in the first episode, I noticed it was actor Phil Morris, who played Kramer’s lawyer Jackie Chiles on “Seinfeld”, and who plays J’onn J’onzz the Martian Manhunter on “Smallville”. And he’s had small roles in several other sci-fi shows I’ve watched over the years, so I know his face. In other words, he’s not just some model they brought in for that picture. So I keep expecting him to show up.

Anyway, so Cromartie (the cyborg from the pilot) is still trying to put himself together. Having reunited his head with his body last episode, this week his extreme makeover is focused on acquiring some flesh and skin for himself. So he steals some blood, finds a scientist who specializes in skin-making, they whip up a tub of bloody goop, and voila, he has skin. He looks a bit like the Toxic Avenger … but at least it covers up the metal skeleton. Oh, and then he steals the scientist’s eyes and kills him.

Meanwhile, Cameron acts like a bitch whore freak. And cracks some jokes. And prevents John from playing the part of a hero to save a distraught girl who throws herself from the roof of the school’s gym. Which brings us to the painted doors …

The first painting was just a closed door, with the letter “A” on it. Which as any high school student who read the Cliff’s Notes for “The Scarlet Letter” can tell you means “adultery”. The second painting was the same door, but with a pink bra hanging from the knob — which seems to reinforce the adultery idea — and the letters “DAN” on it. Dan? Who’s Dan? Is that his bra? Or did he steal it from the girl who keeps crying every time she sees one of these paintings? The third painting is the same door, with the same pink bra, but partially open this time, and a glimpse of a semi-clothed woman standing behind it. And now the letters spell “IDAN”. I’ve run through the possibilities in my head, and since we’re talking about a high school, one word springs to mind here: “GUIDANCE”. As in, guidance counselor. Did the guidance counselor have an affair with this girl? Did he maybe get her pregnant? And if so, who’s painting the doors? Is it terminator-related? Cameron says the doors look like the frescoes of some artist, but I didn’t catch the name. Is it relevant?

Anyway, the details of all this are strange enough that I’m guessing this storyline isn’t closed. If John & Cameron are staying at this school for now, then the mystery of the doors will probably play itself out in future episodes. Maybe the guidance counselor (if I’m right about that) will make a play for Cameron and live to regret it. Or maybe he’s already involved with that mopey blonde chick that John is so fascinated by, and this will force John to have to act the hero, even though Sarah doesn’t want him to.