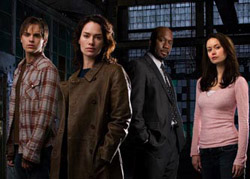 Previously on Terminator … an artificially intelligent computer from 2029 named Skynet wants to eradicate mankind. So it sends a cyborg assassin back in time to 1984 to kill Sarah Connor, the not-yet mother of the human resistance leader. Her future son, John Connor, sends back a man named Kyle Reese to protect her, and he does, and then gets her pregnant with John. Ten years later, two more terminators from 2029 arrive, one programmed to protect John Connor and the other sent by Skynet to kill John Connor. The good one tells them that a Cyberdyne employee named Miles Dyson will create the first self-aware computer in August 1997, which will evolve into Skynet. So Sarah tries to kill Dyson, and can’t do it, but he dies anyway and blows up all of his AI research. Sarah and John and his pet terminator kill the bad morph-y terminator, the good terminator kills itself, and the future is safe.

The Sarah Connor Chronicles picks up the story in 1999 …

In the pilot, John Connor is fifteen years old. He and his mother have been bouncing around from one town to another for the past five years, trying to keep one step ahead of The Law, who believes that Sarah killed Miles Dyson. There have been no terminator sightings in that time. Sarah starts to fall in love with some dude named Charlie, gets engaged, and decides it’s time for her and John to move again, to some podunk town in New Mexico. The sad fiancee files a missing persons report, which puts Sarah on the police grid again, bringing them unwanted attention of the cybernetic variety. 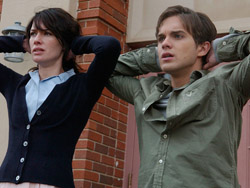 John starts going to school, and on his first week there, a substitute teacher — actually a future cyborg — named Cromartie digs a gun out of his leg with a letter opener, and uses it to try and kill John. But a cute girl — actually a future cyborg — named Cameron (Summer Glau of Firefly) takes a bullet for him, giving him time to jump out the window. We get the classic, “Come with me if you want to live!” moment, and John and Cameron (have you figured out why the name is cute yet?) escape in a truck. Cromartie finds Sarah Connor, tries to use her as bait to get John, but Cameron turns the tables, and after a brutal smackdown, they all escape again while Cromartie reboots.

Turns out Cameron is from 2027. Remember, the death of Dyson created a new timeline, and in this one, Skynet goes active in April of 2011. Everything’s a bit more complicated now, because the John Connor in this new timeline knows everything he learned in the second movie, and has put many more players in the game. Besides Cameron, there’s also some guy named The Engineer, who was sent back to 1963, and whose legacy is an isotonic cyborg-killing gun and a time machine, hidden in a bank vault. Sarah uses the gun to incapacitate Cromartie, and Cameron uses the time machine to send the three of them forward in time to 2007, at a critical point in Skynet history. 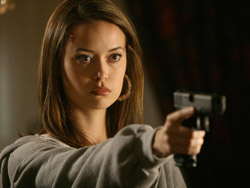 Which brings us to episode two, Gnothi Seauton (which means “Know Thyself” in Greek), where a few days after the time jump, Sarah is trying to scramble together new identities for them all. Cameron tells her about a group of four future resistance fighters that John has set up to act as a kind of supply depot, but when they get there, a new bad cyborg has already beat them to the punch, killing all four. It runs when it realizes what Cameron is, and they lose it. Then Cameron reveals that one of the reasons they’ve jumped ahead to 2007 is because Sarah died of cancer in 2005. Which, if you’ve seen the Terminator 3 movie, is effing BRILLIANT! Basically, the writers have invalidated the events in that movie — which included Sarah having died of cancer and Skynet launching nuclear missiles at the end — by just leapfrogging it entirely.

Okay, so Sarah goes to her old friend Enrique to get new IDs, and he sends them to his nephew Carlos, who wants $20K. They go back to the resistance safe house, find some money and diamonds, and barely escape before the cyborg gets there. Somebody with a Skynet concentration camp bar code on their arm watches them leave. After getting the new identification from Carlos, Sarah goes back to confront Enrique, who she believes is lying to her (and it turns out he is), and before she can find out for sure, Cameron kills him. Turns out that unlike previous terminators, Cameron takes orders from nobody but the future John Connor himself.

Meanwhile, it turns out that Cromartie’s head has time traveled with them. He reactivates his body, which is buried in a junkyard, brings it to him, and I’m sure he’ll be causing trouble for our heroes soon enough. But for now, Sarah has decided to stop running, and take the fight to Skynet, just as she did in the second movie. Oh, and John is doing stupid teenage things like leaving the house when he’s not supposed to, using the internet, and making contact with Sarah’s ex-fiancee Charlie. And you can tell that he’s already hot for Cameron.

All in all, I’m enjoying the show so far. I’m a sucker for just about anything involving time travel and/or “The Fugitive” formula, the action and special effects really are (as per the marketing hype) of a movie caliber, and swapping Arnold out for Summer Glau was an inspired move. Speaking of which, I like the way they’ve written Cameron. The danger with a character like this is that you go too goofy with it, and overplay the whole “I’M A ROBOT!” shtick. But here the touches are understated so far, and she/it isn’t asking a lot of dumb questions or making dopey robotic blunders and faux pas. Her Pinocchio (Pinocchia?) Phase is inevitable, but hopefully they don’t rush it.