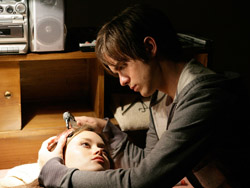 Okay, so just for the record? What we saw last night was not really a “two-hour finale” for The Sarah Connor Chronicles. It was the next-to-last episode and the season finale, played back to back. I’m just saying. I enjoyed both episodes very much — more on that in a moment — but I wish networks would stop playing this particular marketing trick. Because some shows actually do go out of their way to create finale episodes that sustain and cohere over two hours, and that’s not what this was. There’s a way to advertise things like this without being deceptive.

Rant over. On with the nice words now …

In “Vick’s Chip”, we do NOT find out that Skynet’s grandfather is the Commodore VIC-20, if that’s what you were thinking. Because we all know that Turk is the illegitimate love child of an Apple IIe and a TRS-80 (Model III). No matter what that tramp Amiga 500 says.

Anyway, the Vick in this case refers to Vick Chamberlain, the name the T-888 cyborg was using as it lived its normal, married life before wiping out all of Derek’s teammates in that safe house. As it turns out, his mission was not to hunt down the future rebels (that was just a fringe benefit), but to help his human wife Barbara create something called ARTIE, which is basically a city-wide traffic control system. Unbeknown to Barbara, this system will eventually become a surveillance “nervous system” for Skynet. Long story short, since Cameron thought to save Vick’s processing chip, the Connor Crew are able to hack into it, learn about his mission, and thwart the plan by patching Cameron’s chip directly into the traffic network. Day saved.

Between all the main action, we get a lot of anti-Cameron posturing by Derek, who may or may not have known about Vick’s mission, but who Sarah now realizes lied about killing her geek boyfriend Andy. So nobody trusts anybody at this point, except John, who seems to trust Cameron more than he probably should. Which might have something to do with the fact that he seemed ready to kiss her as he slid that processor chip back into her hole (DIRTY!). Which begins to make me wonder — just what kind of relationship do these two have in the future??? “Tight” presumably. We already see them keeping secrets from Sarah together — like the fact that Cromartie is hot on their heels. I wonder exactly what we’d see if we hacked into Cameron’s chip? 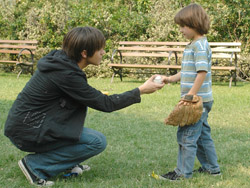 “What He Beheld” (the ONE-hour finale) opens with a flash forward to June 2011 — Derek & Kyle enjoying their last few moments of childhood innocence, playing ball, moments before some nukes pass overhead, kicking off Judgment Day. Jumping ahead a bit, this sets us up for another scene later in the episode, when Derek will take John out for some ice cream to celebrate his 16th birthday, and the two of them will sit in the park watching two kids play ball. At first, you think it might just be a simple thematic callback on the writer’s part … but it actually is a slightly younger Derek & Kyle. John figures this out, Derek confesses that he knows John is a Reese, and John the teenager gets to hand a ball to his five year old father. It’s all very touching, in a paradoxical way.

The major plot line deals with the Connor Crew’s ongoing hunt for the Turk. They’ve used the contact info Cameron obtained from the Russian to broker a $500K deal — via internet cafe — with some bad-ass dude with a British accent named Sarkissian. But it’s all a setup. This guy has been doing his homework, and knows that information about The Outlaw Sarah Connor is worth far more than half a million dollars. Things get complicated, Cameron kills a henchman, Derek holds a gun to a little girl’s head, Cameron agrees to go to the prom, Sarkissian dies, and in the end, they still don’t have the Turk. And, as it turns out, they didn’t even kill who they thought they killed. The real Sarkissian was the dude behind the counter at the internet cafe.

Meanwhile, Our Man Ellison is still hot on the trail … but of Cromartie now, instead of Sarah. Thanks to a tip from Charlie the EMT, which leads him to investigate “Agent Kester”, combined with the cyborg hand that was briefly in his possession, Ellison knows now that he’s dealing with a machine. Unfortunately, he doesn’t know enough about exactly how dangerous that machine is, and in his naiveté, executes an FBI raid on Cromartie’s hotel room. The result is one of the most cinematically impressive scenes I’ve ever seen in a sci-fi TV show …

With Johnny Cash’s “The Man Comes Around” as the soundtrack, we watch from the bottom of a pool as one broken FBI agent after another is thrown unceremoniously into the increasingly blood-tinged water — one, two, three, half a dozen, a dozen — all sinking slowly toward the camera. That scene alone was worth the price of admission. When it’s over, we see Cromartie pointing a gun at Ellison’s face. Ellison shuts his eyes, a beaten man, ready to die … and Cromartie walks away. Not sure why. Because he knew he wasn’t a threat? Or does he need Ellison alive for some reason?

But this is not the biggest shock of the finale. No sir. Johnny Cash is not finished singing. We see a scene between Sarah & John, who has in fact remembered John’s birthday, even though John believed she would not. They joke and smile, and Sarah tells him that Cameron has left to pick up his cake. (Uh oh — things are way too happy here.) Cut to Cameron climbing into their black SUV. She smells something odd, looks around, sees Sarkissian walking down the street, turns the key in the ignition … and the SUV blows up. Apparently, more than one man has come around. My guess is that the bomb was meant for Sarah. But this is probably little consolation to Cameron.

Next season (?), on The Sarah Connor Chronicles: We finally get to see what Cameron looks like naked. Completely naked. Without any skin or muscles. Just a shiny, curvy exoskeleton. Oh, and good news for all the Brian Austin Green fans out there — his character didn’t die!

Seriously FOX, you better renew this one!