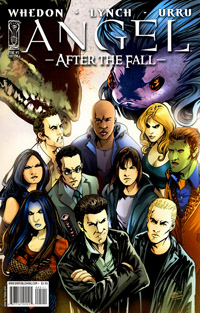 He jumps on his pet dragon and heads to the show. On the way, he saves human who’s been tossed into the crowd by a demon. Then he gives a really bad, very uninspiring speech. Then the champions start kicking his ass … or trying to. There’s a T-Rex, and a She-Skip, and a Human Torch, and a Shadow Thing. Please stop me if these descriptions are too technical for you.

Meanwhile, back in Happy Town, Lorne the Neutral is getting drunk. At the Playboy Mansion, Spike the Brave is preparing a strategic retreat. In Santa Monica, Connor the Bland and his crew are digging in, preparing their defense against a potential demon attack. Gunn the Confusing is lurking on the sidelines. And Wesley the Ghost is off in the ether, getting scolded and tortured by Wolfram & Hart.

But just as things are looking bleakest for Angel, the cavalry arrives. Drunk Lorne has climbed down off the fence and rallied the troops — Spike, Illyria, Connor, Electric Gwen, Werewolf Nina, and Groosalugg. Even the dragon gets into the game, going head to head against the T-Rex in a giant reptilian death match the likes of which have not been since the Godzilla/Ghidorah bout in 1964. During the battle, Spike strikes a deal with Angel to help Illyria, who is going increasingly crazy. Then Wesley shows up, much to Spike’s surprise and dismay. And before he can tell Wesley to shove off, Illyria sees him … and suddenly reverts to Fred.

TO BE CONTINUED … but not until Issue 9, after the “First Night” arc.