Sorry. I guess you see now that I’m not a fan of Runge’s art. Moving on …

Long story short, Angel sends everybody away, learns that Gunn’s a vampire, and Gunn takes Angel into his crib to reveal to him that he’s inherited The Powers That Be visions from a demon that was formerly being exploited by a pack of vamps. Turns out Gunn believes he’s fated to save Los Angeles. Angel tries to tell him that TPTB has no power here and that he’s being deceived, but Gunn’s in hardcore denial. He runs Angel through with a sword, then uses his magic doohickey to undo all the magic that has kept Angel alive as a human, thereby reverting him to a painful collection of broken bones. In the meantime, Nina gathers the troops, and Connor, Spike, Gwen, and the dragon return to Gunn’s hideout. But before they get there, something goes wrong with Gwen … 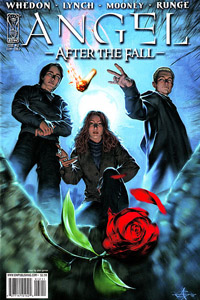 Which is where Issue #12 opens. The good news is, Nick Runge isn’t the artist any more. The bad news is that Stephen Mooney’s art, while better than Runge’s, still isn’t really cutting it for me. There are some nice panels here and there, and at least he always draws backgrounds, but there’s a real stiffness to the inking that puts me off. The line thickness varies haphazardly, and the blocky shading rarely seems true to what the light source in the panel is. Or something. Anyway, I digress …

So it turns out Gwen has been a part of Team Gunn all along, and that she’s bought into the idea that he has the power to save Los Angeles and to give her control of her electric powers again. But that’s really the least interesting detail of this issue, which is probably why that subplot gets completely dropped after about two pages.

What is interesting? Um, let me think. Maybe, I don’t know, THE RETURN OF CORDELIA??? Of course, at this point, we’re not sure if it’s really her. As “Cordie” herself says, it could be a pain-induced delusion, it could be Wolfram & Hart shenanigans, or it could really be her. Regardless, she’s written as if she’s there, and props to Brian Lynch — the scenes between she and Angel read true. He’s really captured Charisma Carpenter’s voice. And Mooney even does a nice job of capturing her likeness. That opening shot of her on the couch actually gave me goosebumps.

Right, so according to Cordie, she’s basically here in a grim reaper capacity — to comfort Angel while he dies. Meanwhile, Wolfram & Hart yank Wesley away from the hotel to intervene in the situation between Gunn and Angel. Which pisses off Fred, who becomes Illyria, and who then heads for Gunn’s hideout. A frustrated Wesley makes an appeal to W&H, and they immediately upload all of the details about the situation into his non-corporeal head. Turns out that Angel is right, that Gunn is deluded, and that pretty much everything that’s happened to the Angel crew since L.A. was moved to Hell has been centered around W&H wanting to prevent Angel from Shanshu-ing.

For those who are fuzzy on their Shanshu history, here’s the gist … The Shanshu Prophecy says, “The vampire with a soul, once he fulfills his destiny, will shanshu (live and die). It is his reward.” There was some contention about who was the prophesied vampire, Angel or Spike. But in the series finale, Angel signed away (in blood) his right to the title. Apparently, Gunn has convinced himself that he’s the one, claiming that perhaps the original prophecy read “vampire with soul” instead of “vampire with A soul”. But according to Wesley, Angel’s blood-signed paperwork never got filed before L.A. moved to Hell, and so it is null and void — Angel IS the Shanshu vampire, and will bring about the Apocalypse. To prove this, Wesley gives Angel a vision of himself vamped out, a sword in his hand, standing amid a wide field of dead bodies (two pages guest-drawn excellently by Runge, by the way).

In response to this, Angel tells Cordelia that he’s ready to die now, presumably to prevent this fate. TO BE CONTINUED. Okay, now I’m kind of interested again.

All of this, of course, is a build-up for the climax of the “After the Fall” series, which will end with issue #16. After that, the title becomes “Angel: Aftermath”. Not sure if that means they get out of Hell. Or find out they’ve never really been in Hell. Or find a way to make Hell a nice place to live. Or what. I just hope it means that Lynch ties up some of these storylines and starts fresh with things. Put some humor back into the title. Let somebody be happy for five minutes. Because there hasn’t been enough contrast in this series to make me fully appreciate all the darkness.