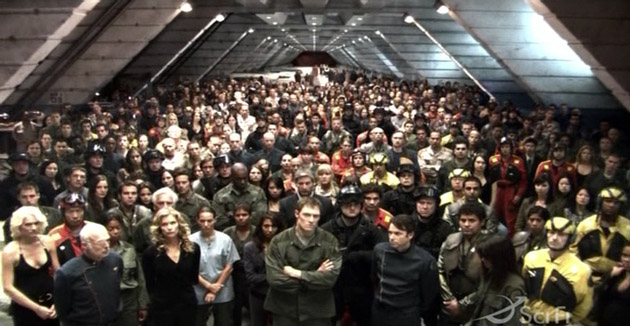 Ron Moore himself wrote this penultimate chapter of the Battlestar saga, and perhaps appropriately, decided that before we can look ahead to how the series ends, it is important to look back first.  In the case of this episode, that means looking WAY back, to pieces of the lives of the key players on Caprica City even before the events we saw chronicled in the miniseries.  Before the Cylon Holocaust … “Before the Fall”.

We see Bill Adama grudgingly accept the task of decommissioning the Galactica.

We see a giddy Laura Roslin of a kind we’ve never known before, just after her sister’s baby shower.  Then watch her break down completely when she learns that both of her sisters and her father have died in a random(?) car crash after being sideswiped by another car.  Then see her again months later, her psyche already scarred over as a result of the tragedy, more closely resembling the cool and calm and battle worn President Roslin we know now … long before she ever became president. 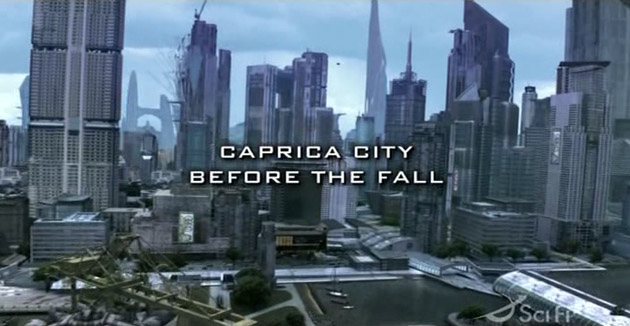 We see Old School Gaius Baltar and Caprica Six (whose name he can’t remember) on their first date.  Then watch Gaius deal clumsily with a personal crisis involving his father, who he obviously despises — perhaps for no other reason than that he’s a farmer — and who is incapable of caring for himself.  Then see Six provide the solution to Gaius’ problem (as she always does), some days later, taking the initiative to put Papa Baltar into a nursing home.

We see the first meeting of an uber-smiley Kara Thrace and Lee Adama, in happier times, back when Zak Adama was still alive, and he and Kara lived together.  And we already know this will end badly.  The next scene for Lee is him stumbling home drunk, presumably after Zak has died in a flight accident, which was indirectly the result of Starbuck not failing him when she should have.  There’s no need to show us how Zak’s fiancee and father reacted to this same news — we’ve already seen the aftermath in episodes dealing with Starbuck and Adama’s complex relationship in Season 1.

What these flashbacks seem to do is tell us that these characters, these survivors of the Attack on the Twelve Colonies, were all pretty much frakked in the head before the bombs ever dropped.  And who knows, maybe that’s what made them well-suited to being key figures in the survival of the human race as a species.  A Roslin with a happy family, an Apollo with a living brother, a Baltar with a satisfying childhood … would any of these people have had the strength required to play the key roles they have played in the post-Apocalypse?  Or is a certain amount of emotional desperation and/or detachment what’s required to be a leader under extreme circumstances? 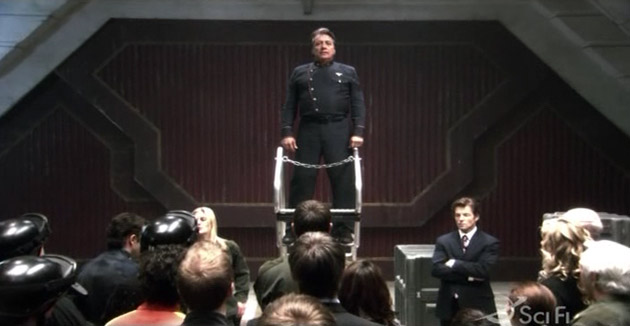 Meanwhile, in the present day, the Galactica is in the process of being stripped for parts when Adama decides to take a break from boxing up his possessions to pay a visit to Anders in the Tub — who, in a cute poetic turn, also got a flashback, in which he was in a tub, in a locker room, giving an interview after a Pyramid game, back in the day when he was a professional athlete.  From Anders, Adama learns the location of The Colony, where Cavil is holding Hera (and is preparing to dissect her), and resolves to make one final stand for a Human/Cylon Future.  He and Starbuck draw a red line down the middle of the flight deck, and he announces that if enough people volunteer — by stepping to one side of the line — then he will lead the Galactica on a mission to rescue Hera.  If not, then he’ll lead a raptor assault instead.

In the end, about one-third of the crew signs on for what’s been sold to them as a suicide mission, including most of the key players … but not Baltar, who stands sheepishly on the other side of the “thin red line” (a term generally used to describe a defensive, not offensive stance).  Even Roslin hobbles down from her death bed to stand by her man, bolstered by Starbuck.  While the intent is noble, the outlook is bleak.  After a recon mission conducted by pilots who had recently been brigged as a result of Gaeta’s Mutiny, it’s discovered that Cavil has located The Colony at the edge of a black hole.  There’s only one way to FTL into the area that won’t result in the Galactica being ripped apart by floating debris, and Cavil will undoubtedly be defending that way in with everything he’s got.  As James T. Kirk once said to Jean Luc Picard:  “I take it the odds are against us, and the situation is grim.  Sounds like fun!” 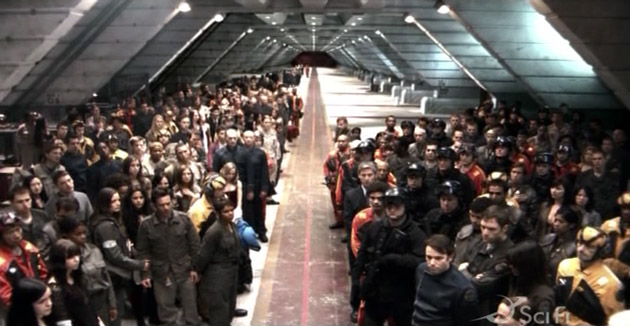 So there you have that.  The final setup to the final two hours.  I’ll be curious to see if any of the details we gleaned about these characters’ pasts will end up being relevant to the finale itself, or if they were just meant to enrich the context tapestry a bit as the present day story heads into its final chapter.  For instance, there’s a sniggling suspicion in the back of my mind that the death of Roslin’s family and Zak Adama may not have been random.  That they might have been acts — like Six’s solution to Baltar’s family problem — deliberately designed to position key people prior to the attack.

Regardless, from an aesthetic point of view, the visual parallels tying the past and present together in this episode were poetic at times.  I already mentioned Anders in the tub.  But did you also notice how Roslin’s scene in the fountain, torrents of water washing over her, was immediately followed by the slow drip of her feeding tube in the present?  And I’m sure the pigeon that Apollo was trying to chase out of his apartment meant something symbolically, although it’s eluding me at the moment.  Anybody want to take a stab at it?