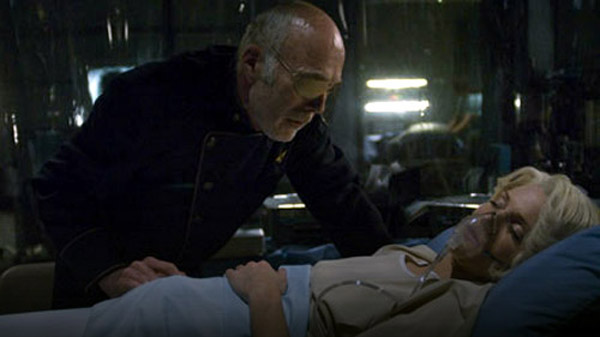 Last week’s episode was informative, exhausting, and bit controversial.  Some people out there, like myself, were thrilled with all the revelations, while others felt that the answers we received were too neat and/or contrived.  And in the two episodes before that, we dealt with the terse action of a fleet-wide mutiny raised and squashed.  But this week, things slow down a bit, and instead of information or action, we’re presented with some good old fashioned raw emotion in the form a painful and well-acted love triangle.

We all saw it coming, of course, the moment we saw Boomer and Ellen flee the Cylon base ship in that Raptor last episode — they were going to return to the Fleet, and when they did, Saul would have to decide between his undead wife and Caprica Six, the mother of his unborn child.  And that’s exactly how it goes down.  Before she even knows what Saul’s status is, Ellen beds Saul, and only after the fact thinks to ask him who he’s sleeping with these days. Upon finding out that it’s Caprica Six, she’s a bit disgusted.  After all, from her historically enlightened point of view, the Sixes are their “children”.  And that disgust only deepens when she learns — and not from Saul himself — that Caprica Six is pregnant with Saul’s baby.

In the midst of all this drama, the Rebel Cylons as a group are faced with a big decision.  Now that the Final Five have been reunited, do they and their children part ways with the Fleet, or do they remain loyal to their human allies and stick around?  The Five put it to a vote, and in part thanks to Ellen’s jealousy, the decision is made to leave, in spite of Saul’s vote in favor of staying.  Emotions run high, and Ellen accuses Saul of being more in love with Bill Adama than with either her or Six — which, you know, is probably true.  Nonetheless, we’ve never seen Saul more passionate and principled as he is in this episode.  His love for Six is clear, and he alone among The Five seems to understand the importance for the future of Cylons and Humans not separating themselves again at this stage of the game.

Sadly, the same love that Six believes made it possible for she and Saul to conceive a “pure Cylon” baby turns out not to be enough to keep it alive.  Either as a result of all the tension or just because the pregnancy was never viable to begin with, the baby — Liam — dies while still in the womb.  Which, along with the previous revelation that Tyrol is not the father of Callie’s baby, means that Hera remains the only Cylon baby … that we KNOW of.  (I’m still guessing that Starbuck is Daniel’s child.)

Which makes me wonder … are the Final Five essentially more human than the Other Eight, but not quite human enough to make a baby possible with an O8?  Because Sharon/Helo had a baby, Saul/Six conceived but couldn’t carry to term, the Cylons on Earth were able to procreate normally with each other, and no two of the O8 have been able to so much as conceive.  So it seems as if a certain amount of humanity is always required in the mix to both conceive and carry to term, and the O8 just can’t supply that.

Anyway, this leads to some very touching male bonding scenes between Saul and his buddy Adama, who frankly seems a bit more emotionally frail these days about the prospect of Galactica dying than he does about Roslin dying.  Tyrol and his rag-tag engineering crew of both Humans and Cylons have been slopping bio-goop on the beams, but it will take time for it to do its magic, if it works at all.  And Adama has come to realize that the end result will be a ship that — like its crew, and like his best friend — is not quite Human and not quite Cylon.  And he’s okay with that.

Meanwhile, Baltar is back to his wacky hijinx.  Having fled during the mutiny to save his own ass, he returns to his flock on Galactica, only to find that one of his followers has assumed leadership.  We know now that doesn’t really care about these people or God any more, if he ever did at all, but it doesn’t stop him from participating in a power struggle with the new leader, egged on by the return of Head Six, who pretty much feeds him most of his lines.  In the end, he assumes control again, and even manages to convince Adama to give him guns, so that his flock can protect themselves against the gangs and thugs that have become more rampant in the wake of the mutiny.

Considering what Sam had to say last episode about The Five seeing people who weren’t really there back when they were on Earth, I’m very curious about the return of Head Six to the story.

Only four more episodes to go …