“Harmonic Divergence” (Issue #21) was written by Jane Espenson and deals with, you guessed it, the Buffyverse’s most ditzy vampire, Harmony Kendall. For those who don’t remember, Harmony first appeared as one of Cordelia’s clique in the second episode of the Buffy series, back when Cordy was still a rich bitch. In the finale for Season 3, she was turned into a vampire, and went onto become an occasional annoyance for the Scoobies, as well as a short-lived romantic interest for Spike. Harmony resurfaced again in Angel, and tried to re-friend Cordelia, but her vampire nature got the better of her, and she screwed it up. She became Angel’s secretary and a regular cast member when the crew took control of Wolfram & Hart, and ultimately betrayed him in the series finale (although Angel saw it coming). And that was the last we saw of Not-So-Sweet Harmony before now.

Not too surprisingly, Harmony has become something of a fame whore. As the story begins, she’s on the outside of the glass celebrity bubble looking in, and stumbles across a way to get noticed when the paparazzi end up snapping a photo of her feeding on somebody who looks suspiciously like Andy Dick. A Hollywood minute later, she and vampires in general are all the rage, and she lands herself a reality show on MTV. But it’s missing something — an antagonist. (To see an episode of Harmony Bites, head on over to MySpace Dark Horse Presents.)

Cue the nameless 16 year old Latina Slayer, who upon manifesting her slayer powers, breaks away from the South Central gang that’s all she knows and can’t figure out what to do with herself. (What’s interesting here is that I wasn’t aware that new Slayers were still being “born” two years after the series finale.) The Scoobies try to recruit her, but she wants nothing of it, and instead ends up trying to take down Harmony by herself, on Harmony’s own reality show. Her inexperience does her in, though, and Harmony makes short work of her, killing her as the cameras roll.

The ironic upshot is that while this should show everybody how evil vampires are, it ends up having just the opposite effect. The Latina Slayer is quickly framed as the villain, and Harmony as the hero. What’s more, this creates public awareness of Slayers, and the perception isn’t flattering. Who are these powerful people who hide among us and presume to declare what’s right and wrong? We’ve seen foreshadowing of this since the season began — remember Willow’s disappointment with Buffy for robbing Swiss banks to finance their good deeds? — and now the public sentiment chickens are coming home to roost. And one has to assume this plays directly into Twilight’s plans. 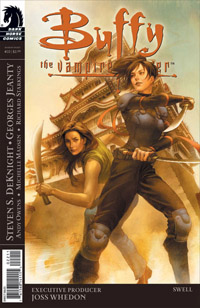 “Swell” was written by Steven S. DeKnight, and deals with two B-List members of the Slayer Army — more specifically, the Lesbian Brigade of Satsu and Kennedy. The story opens with Satsu in Japan, fighting a giant monster (imagine that!). Kennedy shows up to save the day, and tells Satsu that she’s there to evaluate her leadership of the Japan contingent. This is only half the truth, however, because it turns out she’s also there to help Satsu emotionally process her doomed relationship with Buffy the Temporary Lesbian.

They retrieve a bag from the giant monster, and the bag contains a very menacing … cute stuffed animal? More specifically, a Vampy Cat, which is of course a barely fictionalized variation on Hello Kitty, and a direct result of the “Vampires Are Cool” trend kicked off by Harmony in the previous issue. (To see some marketing materials for Vampy Cat, head on over to MySpace Dark Horse Presents.)

As it turns out, Vampy Cat is neither a vampire cat nor a stuffed animal, but is actually one part of something called “Swell” — a collective Legion-like demon entity, the individual parts of which can climb down a human’s throat and control them, gradually sucking the life out of them until they dry up. The one they took from the monster climbs inside of Satsu overnight and turns her into a misogynistic homophobe. Kennedy beats the creature out of her, but not before it has a chance to extract the exact location of Scooby Central in Scotland from her mind.

Armed with this knowledge, Swell arranges to ship thousands of Vampy Cats to Scotland. Team Japan figures this out, and intercepts the ship, which results in Kennedy and Satsu first fighting thousands of individual Vampy Cats, then one giant one that’s just the little ones all massed together. With the help of a torpedo launched by a Korean submarine that Satsu appropriated from some vampires recently, the ship and Swell are blown up, and Kennedy and Satsu escape unharmed.

Unfortunately, it’s a victory they can’t celebrate for long. Because it turns out that Swell was working for Twilight, and now Twilight knows more about the Slayers than ever. Even worse, Harmony and the media jump all over the Slayers’ destruction of the Vampy Cats shipment as a kind of bigoted, anti-social act, and public sentiment against them (and for vampires) continues to grow.