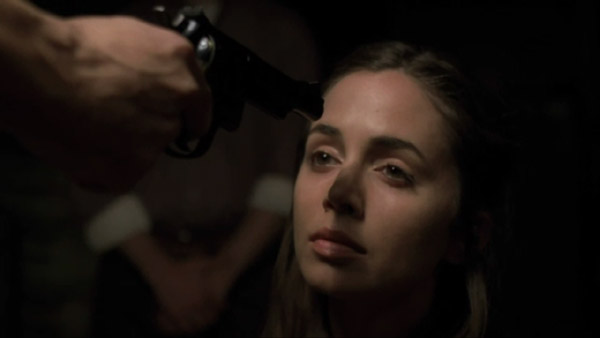 Tim Minear wrote this week’s episode … and I think it made a difference.  For those who aren’t familiar, Minear produced most if not all episodes of Angel, Firefly, Wonderfalls, and Drive, and wrote some of the best episodes of each.  What’s interesting is that all of those shows were on FOX, and most of them were canceled within half a season.  So it’s funny — and a bit portentous — that he should be back on FOX again, supporting not only another series, but a Whedon series.  Anyway, I’m a fan of Minear’s work, and feel that with this episode, he added some much-needed humor that has largely been missing so far.

I’m referring, of course, to Topher’s and Doc Saunder’s research into the cause of Victor’s “man reaction” in the communal Dollhouse shower.  Topher reminds me of Xander or Wash in these scenes, and Saunders a kind of “straight man” Giles.  But as funny as these scenes are, the situation is quite serious.  The agency needs these Actives to be neuter in all ways while inactive — including sexually.  Or, as the Boss Lady warns, one temptation will lead to other temptations, and presumably, that leads to Alpha.  So Victor’s crush on Sierra is an aberration that must be dealt with sooner, rather than later, and she orders him wiped.

But this is only the B-story.  The main story involves Echo being assigned to a mission for the ATF in which she’ll infiltrate a cult compound being led by a known criminal.  It’s a special favor the agency is taking on for a senator, in exchange for whatever interference he’s been running for them over the years, and in order to pull it off, Echo is surgically blinded, and turned into a walking video camera.  The cult leader, played by Brian Bloom (who just last year played a terminator on Sarah Connor), has his misgivings about the naive blind girl who wanders into his compound claiming to have had a vision about him.  But a flashlight and some heated questioning seem to help convince him.  Unfortunately, when the ATF moves in on the compound, his faith in Echo is shaken again.  He slaps her upside the head, and unwittingly mucks up the wiring in her eyes.  She can see again (“It’s a miracle!”), but the ATF can’t.

Mayhem quickly ensues as the cult leader decides to burn the place down and let God judge them all, Echo knocks the leader out and tells everybody to stop being chumps and save themselves, and Boyd rushes in to save Echo … but not before Dollhouse Security Chief Dominic sneaks into the burning building and knocks Echo out, presumably with the intent to kill her.  My guess is that he means to prevent her from becoming another Alpha, but it’s kind of a douche way to go about it.  And what he doesn’t realize is that Echo remembers — at least on some level — everything bad he’s ever done to or said about her, and she doesn’t like him very much.  So if/when she does “go Alpha,” you can bet he’ll probably be her first victim.

Meanwhile, Agent Ballard receives another clue from an anonymous source about Echo, this time in the form of what appears to be the same video disc we saw Alpha(?) watching at the end of the first episode.  He also receives another pan of Italian food and longing moon-eye gazes from his neighbor, who I’m really starting to think has to be more than she appears.  Maybe an Active?  Maybe an agent working for some agency other than the FBI?  Hard to say.  But I can’t shake the feeling that she’s going to pull a Keyser Soze one of these days.  Anyway, Ballard happens to see Echo’s face in news coverage of the raid on the cult compound, but by the time he gets there, Echo and Boyd have already shipped out.

All in all, I felt this was a stronger episode than most.  Although word on the street is that NEXT week’s episode is the one to watch.  Whedon himself has written it, and it will apparently advance the mythology considerably, tying up loose ends and strengthening the show’s premise.  Too bad they timed it to air against the much-hyped series finale of Battlestar Galactica.  D’ohh!!!  It’s not a problem for those of us with dual-tuner TiVos, of course, but it could really be a kick in the gut to the show’s already flagging ratings on a week when they should have expected higher numbers than usual.