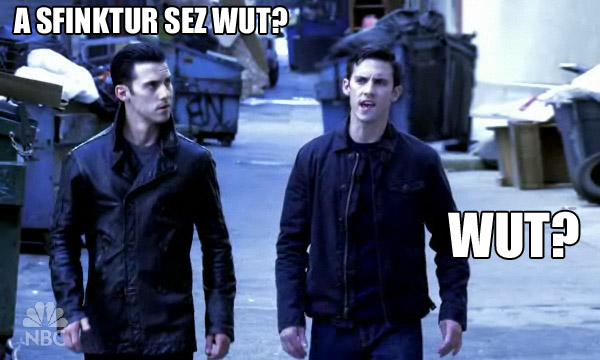 Tracy-Not-Niki learns that she is one of three identical triplets (Tracy, Niki, and Barbara) who were separated at birth and given powers at a young age through DNA manipulation, and this distresses her so much that she tries to kill herself by jumping off a bridge, but Flying Nathan swoops in and saves her, they make out, and four years later, they go on to become the President and First Lady, with a little encouragement from the Linderman in Nathan’s head.

Future Peter takes Scarless Peter four years into the future, where/when many people have superpowers (thanks either to the formula that Hiro and Ando are hunting down or maybe Mohinder’s formula), and where/when Peter’s voice has apparently annoyed everybody so much that they (Claire, Daphne, and one of the Level Five escapees from last week) want to kill him, and try to, but Scarless Peter escapes and finds Sylar, who is living a happy life as a father now, and who teaches Peter his power so that Peter will be able to understand all the ramifications of any changes he might consider making to the timeline, but warns Peter that this will also mean inheriting his “hunger” for hero brains.

Claire and crew track Peter to Sylar’s house (formerly the Bennett house), get sloppy in the process of trying to kill Peter, accidentally kill Sylar’s son instead — who interestingly is named Noah, after HRG — and as a result, Sylar loses control, goes nuclear, and blows up the entire city of Costa Verde, killing 200,000 people. 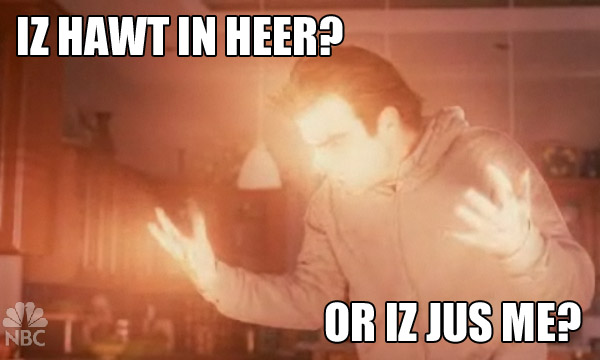 Following the explosion, Darth Claire captures Scarless Peter, and is all, “I have you now, Uncle Jumpypants!” and Peter is all, “(grunt),” and the Haitian is all, “(menacing glare),” and Claire is all, “Let me show you some cutting techniques I learned back when I was a teenager and used to loathe myself, unlike now, when I love myself and know that MY FINGERS ARE NOT SHORT AND PUDGY and even if they are, that’s okay, because my Daddy With The Glasses always told me I was beautiful and I BELIEVE HIM!” and the Haitian is all, “Erm,” and Peter is all, “There’s a place for us … somewhere a place for us …” and Claire is all, “(cut cut cut),” and President Nathan walks in and makes her stop, and Claire’s all, “I hate you! I hate ALL of you!!!” and leaves the room, and Peter does Nathan a favor by cutting his head open before jumping back to the present day to visit Sylar in Level Five, who’s all, “Welcome to the Nom Nom Club, Brother!”

MohinderFly gets more aggressive but no more interesting and Maya is inexplicably talking/acting as if she’s a Nuyorican, while Matt Parkman looks into the future, sees himself making babies with Daphne the Speedster, then sees her die in the Costa Verde disaster (and by the way, turns out that was NOT a print shirt she was wearing in that painting), while Hiro and Ando try to escape from Level Two, FAIL, and Mama Petrelli tells Hiro how he can redeem himself — by digging not-dead Adam from his grave, which he does … and let’s just say, Adam is NOT happy. 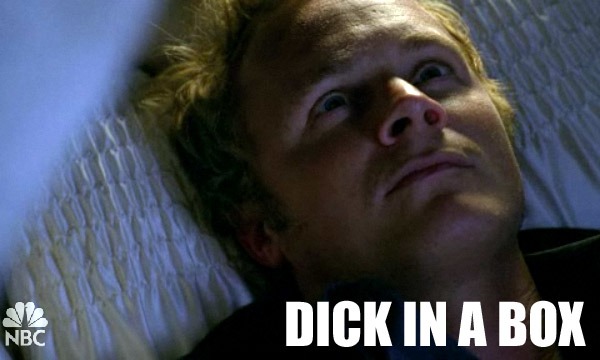 8 thoughts on “Heroes: I Am Become Death”