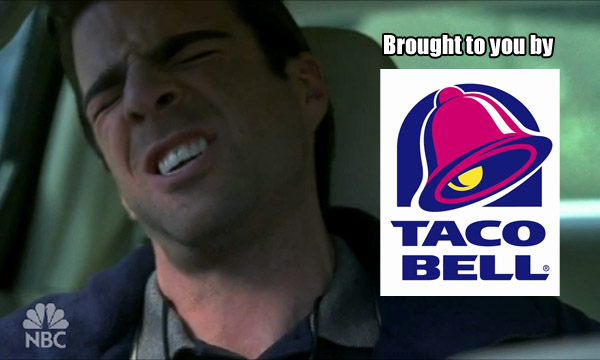 Okay, so the only thing more surprising than getting a strong episode last week was getting another one this week.  Why?  Because this one revolved around the three characters I’ve actually been the most bored with this season — Peter, Claire, and Sylar.  But as with last week, a good script can make all the difference in the world.

In the past two seasons, we’ve seen Sylar go from Hannibal Lecter to emo misunderstood guy to moo-haha bad guy to looking for daddy guy, none of which I ever felt captured the full potential of the character.  And while I think that changing his persona yet again probably dilutes his potential over the long run, I have to say I really did enjoy this latest incarnation of Sylar as a detective helping Danko the Hunter track down a serial killing shape changer.  If last week’s episode echoed the Superman movie, this one clearly echoed the Brad Pitt / Morgan Freeman movie Seven … right down to the scene with the severed head in a box.  Sylar operating intelligently behind the scenes, immersing himself in the mind of his prey, is so much more interesting to me than over-the-top Sylar throwing people around with his mind and slicing foreheads open with his finger.

In the past two seasons, we’ve seen Claire go from an interesting twist on the stereotype of a cheerleader to a useless lovesick teenager to Miss “Claire Bear” Daddy Issues to Harriet Tubman for Heroes.  As for Nathan, he’s gone from politician to politician to religious nut to politician, with little to no explanation of why exactly he does any of the seemingly self-loathing things he does.  So color me surprised that in this episode, I was actually interested in the way that Nathan and Claire interacted with each other when they had no choice but to spend some time together.  Claire’s “You’re Supposed to be Superman” speech was almost sappy … but I actually believed her disappointment over her father not living up to his drunken promises.  And I believed Nathan’s visible shame over what a horrible father and/or hero he’s been to his daughter.  And I liked that in the end, they both owned their dysfunctional relationship and moved on.

As for Peter … okay, I was still a little bored with him.  But Mama Petrelli’s admission that she hasn’t been able to sleep was somewhat compelling.  Her power is to see the future in her dreams, but she can’t sleep.  She looks like hell, and my guess is that she’s got the cause and effect mixed up.  It’s not that she can’t dream because she can’t sleep — it’s that her mind won’t let her sleep, because she’s afraid of what she’ll dream.  Either guilt or a crisis of faith — or more likely both — have detached her from her own heroic nature, and it takes the faith of her “good son” (with the Jesus complex), and maybe the act of HRG choosing not to arrest her, for her to find the peace she needs to connect with her power again.

And then there’s Danko the Hunter.  For some reason, his plot twist reminded me of Buffy Season 5 (which I’ve been re-watching recently), in which Riley the Boyscout feels so powerless compared to his Slayer girlfriend that he starts letting vampire chicks suck his blood at night.  Sylar is everything Danko hates about superhumans … but he’s compelling and convincing to him too.  He offers the desperate hunter a light at the end of the tunnel, and convinces him — in a way that HRG has been unable to do — that the “One of Us, One of Them” concept makes sense.  But I suspect it’s a relationship born of necessity that won’t end well, because there’s something sad and shameful about the pairing from Danko’s perspective.  He’s always been kind of a dickhead, but at least he’s been a dickhead with strong principles … and now he’s compromising, sliding into a situation that I don’t think he understands well enough to control.  At least, not as well as Sylar does.

3 thoughts on “Heroes: Into Asylum”