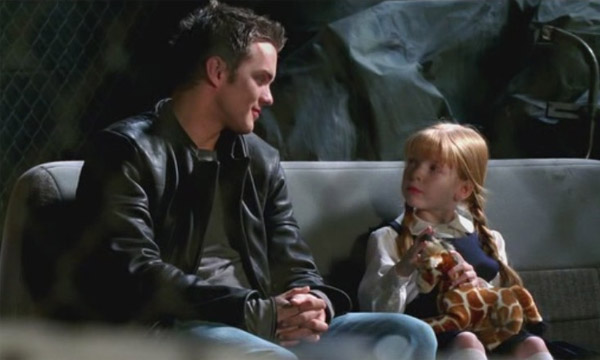 Okay, allow me to just get the 800 pound gorilla/elephant in the room out of the way and say, “Holy crap!”  This, of course, was my response to what happened about a quarter of the way through, when, while in the process of trying to rescue young Savannah Weaver from a Terminator disguised as a water delivery man, Derek Connor took a bullet to the forehead and died.  It happened so quickly that I immediately jumped back to watch it again (thank you TiVo!), and sure enough, he hadn’t been shot in the leg — which would have necessitated another obligatory hospital episode — or in the chest — where a prudent bulletproof vest might have saved his life — but right smack in the middle of the forehead.  That was it.  No getting around it.  Derek was dead.

As for why the Connors were trying to save Savannah Weaver from a Terminator, it’s because John found her photo on the PDA of one of the men who came to the lighthouse and killed Charley last week.  Poor John.  Between his real dad, Charley, and now Derek, he’s all out of father figures now.  Anyway, John recognized Savannah from Dr. Sherman’s office, back when he helped the girl tie her shoe in the waiting room, not realizing who she was.  This odd coincidence alone is enough to convince the Connors that they need to find the girl, and when they do, they find the Terminator.

As for why the Terminator was trying kill Savannah, that’s less clear.  But my assumption is that he was a foot soldier of the Cyberdyne faction, which as we learned last week has its own A.I., and may stand in direct opposition to the ZeiraCorp faction.  Which has me wondering more than ever if maybe Weaver-1000 isn’t as bad as we’ve assumed she is all season.  Further feeding into this are conversations that John Henry has with Ellison about whether he is the Cain or Abel in his relationship with his A.I. “brother”, and conversations between Weaver and Ellison about how John Henry will save them all.  It certainly seems uncharacteristic that either a cyborg or a potentially malevolent A.I. should care to such an inordinate extent about the life a young human girl.

Derek’s death aside, Team Connor does manage to incapacitate the Terminator and rescue Savannah.  Ellison watches the security tapes with John Henry, recognizes the Connors, and convinces JH to lie to Weaver about the tapes.  Ellison meets with Sarah, who convinces her to hand over Savannah in exchange for a meeting with Weaver, who also grudgingly agrees to the same deal.  Meanwhile, John bonds with Savannah, and as they talk, he learns not only about John Henry, but also about the fact that JH has Cromartie’s face/body.  (Hey, John Henry Cromartie = J.H.C. = Jesus H. Christ?)

Despite the fact that this latter bit of intel means Ellison is either lying to and/or withholding from them in a major way, the Connors move ahead with the exchange of Savannah, which goes down at a movie theater.  The Connors enter, put Savannah in a seat by herself, Ellison enters, talks to Sarah, she tells him where Savannah is, and as Sarah leaves the building, she is pounced on by a SWAT team.  John immediately accuses Ellison of betraying them, but he denies it, and I tend to believe him.  More likely, the FBI detective who’s had his eye on Ellison all episode is to blame.  Sarah puts up an admirable fight with the cops, but is ultimately taken down, while John and Cameron duck out the back door.

In the closing, creepy scene, we see/hear John Henry and Savannah singing an old Scottish folk song, “Donald, Where’s Your Trousers,” and listen to it as we watch a box containing Derek’s ashes get lowered into a hole, in the same green, hilly graveyard that his brother Kyle is buried in.  R.I.P. B.A.G.!

Next week … the season and/or possibly series finale.  Because I haven’t heard any word yet about whether or not the series will be renewed for another one.